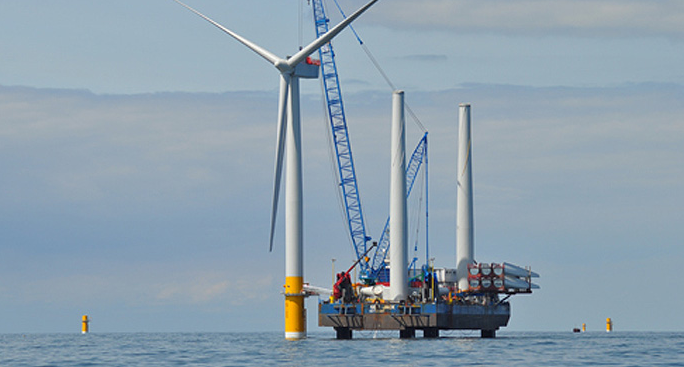 Six Japanese banks extended a syndicated loan of about 20 billion yen ($252.3 million) to two companies for the acquisition of Seajacks International Ltd. (SEAJ), a British offshore wind power firm. The purchasing companies, Innovation Network Corporation of Japan (INCJZ) and Marubeni Corporation (MARUY) have completed the deal after closing the financing,which had been agreed upon with Riverstone Holdings LLC (RSTON)earlier this year.

Marubeni Corporation and Innovation Network Corporation of Japan announced in March they planned to purchase Seajacksfrom Riverstone Holdings LLC for 70 billion yen($883.2 million). To support the acquisition,six of Japan’s largest banks have agreed to a loan of 20 billion yen,the nation’s largest-ever extended loan in connection with wind power generation. The funds were provided through a syndication consisting of Mizuho Corporate Bank,Swedbank AB, ING Bank N.V., Sumitomo Mitsui Trust Bank, Sumitomo Mitsui Banking Corporation and the Development Bank of Japan. This syndicatedloan is not just a unique blend of Japanese mega-banks, but it also marks the first leveraged buyout (LBO) financing to cover a cross border mergers and acquisitions (M&A) of a European company by a Japanese enterprise.

!m[](/uploads/story/88/thumbs/pic_1_inline.png)The purchasing company, INCJ, is a Tokyo-based public-private partnership (PPP), established as a temporary corporate entity (for a 15-year period beginning July 2009) between the Japanese government and 19 Japanese corporations.Marubeni, on the other hand, is one of the largest trading companies in Japan, which has a strong track record in the engineering, procurement and construction (EPC) of electric power plantsas well as holding power generation assets of 8,800MW, including offshore wind power.The two companies together hope to contribute to and promote Japan’s use of energy from natural resources by constructing new wind power generators in the oceans around the island nation.With the decision to complete the acquisition of Seajacks, INCJ and Marubenialso made a commitment to make the UK wind power company the top player in the industry.In support of this commitment,Blair Ainslie, Managing Director of Seajacks UK, said: “Seajacks has become a leading brand in the offshore wind farm sector and with the backing of our new owners Marubeni and INCJ we expect Seajacks’ future to be very bright.”

The recently-completedacquisition of Seajacks is the very first full scale entry by a Japanese enterprise into the offshore wind power installation business. What is more, the large syndicated loan, which has helped the financing of the purchase, demonstrates the support for the development of the Japanese renewable energy sector.With this year seeing Japan completely abandoning nuclear power as a result of last year’s crisis in Fukushima, renewable energy sources including wind power generation have gained more attention.But even thoughinterest in the Japanese wind power sector is rapidly increasing, there are not many locations on land in the country suitable for wind power generators.And as stronger winds are more common at sea than on land, it is advantageous to build offshore wind power installations. The acquisition of Seajacks is seen as a valuable step in bringing know-how to future projects in Japan itself.

Deyana has a media background as a Journalism graduate. With a general interest in the financial markets and global economic events Deyana used to cover a varied range of current events for Invezz.
Related news
London stocks end lower as the U.S. reports a record increase in COVID-19 cases
3rd July, 19:27
Daimler to sell its Hambach factory as it commits to streamlining global production
3rd July, 18:21
Delivery Hero reports a 94% growth in orders in Q2 as COVID-19 restricts people to their homes
3rd July, 14:29
Intel Corporation to invest £203 million and get a 0.39% stake in Indian Jio Platforms
3rd July, 13:23
HSBC cites low returns as it discontinues its industrial metals business
3rd July, 12:14
Invezz uses cookies to provide you with a great user experience. By using Invezz, you accept our privacy policy.