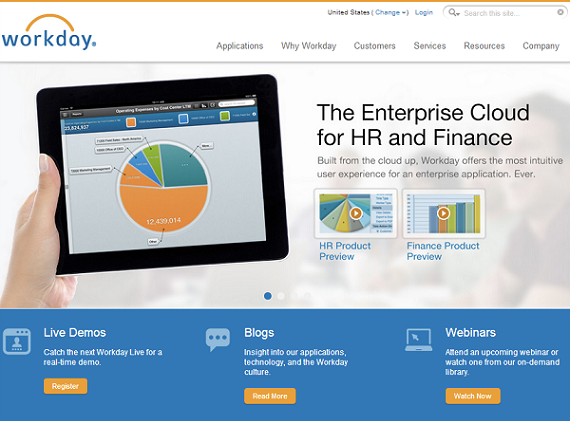 Workday, a provider of cloud-based applications for human resources, is planning the biggest technology IPO since Facebook’s widely-maligned listing. The software company expects the price of the stock at the initial offering to be in the range of $21 (£13.04) to $24 (£14.9), which would value the company at about $3.61 billion (£2.24 billion). In its Security and Exchange Commission filing the Silicon Valley firm has stated that it plans to sell 22.8 million Class A shares, which if priced at the midpoint range of $22.5 will raise some $511.9 million (£317.82 million). Out of the total, about $472.7 million (£293.5 million) will remain for the company when underwriting discounts, commissions and offering expenses are deducted.

!m[](/uploads/story/510/thumbs/pic1_inline.png)If successful, the company’s valuation will be more than 14 times this year’s revenue and that’s only if Workday’s growth rate doesn’t slow down in the second half. Given the recent mishaps with Facebook (NASDAQ:FB), Groupon (NASDAQ:GRPN) and Zynga (NASDAQ:ZNGA), which all saw their shares plunge following their IPOs, Workday is making a brave decision to float with such a high price target especially when it has been operating at a net loss for the past years. The reported sales for the half-year of 2012 were $119.5 million (£74.2 million), a 118 percent increase compared with a year before. Net loss however also rose to $46.9 million (£29 million) from $36.3 million (£22.54 million) in the second quarter of 2011. According to the Financial Times, Workday warned future investors that no profit is expected in the immediate future.

The Silicon Valley company relies on subscription income which provides a steady stream of cash that should eventually make up for the current high up-front marketing and development costs. As the FT points out, Wall Street has grown increasingly fond of business technology companies, which might be unprofitable during periods of rapid growth, but retain increasing revenues that pay off in the long run.

In his New York Times Blog, Quentin Hardy explains that Workday’s business involves selling cloud-based software for financial programs and human resources, which helps companies manage their personnel departments. Workday has the ambition to challenge rivals such as SAP and Oracle by offering a new series of business software products for service industries. Its long-term goal is to combine data analysis and social media, which would help clients forecast and plan business operations and deploy teams using cheap and accessible software.

After the floatation, the two chief executives of Workday Dave Duffield and Aneel Bhusri will control 67 percent of the voting power– a decision strongly supported in Silicon Valley as it gives founders breathing room to develop their companies without the fear of hostile acquisitions. Mr Duffield already has bitter experience with such manoeuvres as his last company, PeopleSoft, was subject to a hostile takeover by Oracle co-founder Larry Ellison in 2004. As reported by the FT, Mr Duffield has vowed that after losing the company he spent 20 years building into the biggest maker of software for human resources management, he would never again leave any of his businesses exposed to a similar threat.
Goldman Sachs and Morgan Stanley will be leading the underwriting of the IPO. Workday plans to list on the New York Stock Exchange under the ticker “WDAY”.