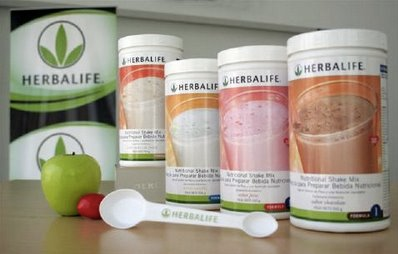 On Wednesday the nutrition firm lost almost $600 million (£369 million) of its market capitalization after traders found out that Mr Ackman has targeted the company through a “patriotic short”. The stock fell on Thursday as well, closing 21.34 percent lower than Tuesday. Shares were trading at $33.30 before Friday’s opening bell.
**Bill Ackman’s Accusations**

The founder of the $11 billion (£6.8 billion) hedge fund Pershing Square explained how and why Herbalife is a pyramid scheme at a three-hour 340-slides presentation in Midtown Manhattan. Alongside two of his employees, Mr Ackman laid out his case saying the nutritional supplement maker has cost failed sales people who signed on with the company $3.8 billion (£2.34 billion) since 1980. The hedge fund claimed it has spent more than a year looking into the company and promised to post the entire presentation online.

Mr Ackman has a price target of $0 onHerbalife’s shares due to his strong conviction the company is going to fail. In his presentation he compared Herbalife to other consumer goods companies of similar size, such as Clorox, and called its flagship product “Formula 1” – a powder supplement similar to Slim Fast – “the only $2bn brand nobody has heard of”. Furthermore according to Mr Ackman 93 percent of Herbalife distributors made no income, while senior distributors “obtain their monetary benefits primarily from recruitment”. The company’s advertising spending was “de minimus” and research and development costs are “not material”. During the presentation Herbalife’s entire business model was compared to a “Ponzi scheme”.

**Herbalife’s Response**
On Wednesday Michael Johnson, chief executive of Herbalife, spoke to CNBC denying all of the allegations made by Mr Ackman and calling the US Securities and Exchange Commission (SEC) to investigate the hedge fund for “blatant market manipulation”.”We are not a pyramid scheme. That is a bogus accusation. We have millions of customers around the world. We don’t pay for recruiting. We have been in business for 32 years.”

!m[Hedge Fund Manager Calls the Nutrition Company “the best managed pyramid scheme in the history of the world,”](/uploads/story/1087/thumbs/pic1_inline.png)
Mr Johnson also pointed out to a large number of put options in the stock set to expire on Friday, which will deliver a substantial profit to their holders if shares fall in the meantime. Mr Ackman said on Thursday he is short on Herbalife’s stock but has no positions in options on the company’s shares. He also added that all of the proceeds from his short position will go towards charity.
Barbara Henderson, a spokeswoman for Herbalife, commented:
“Mr. Ackman has previously been quoted on CNBC saying be wary of companies that restrict or prevent access to their earnings calls. But when we asked to attend and participate in today’s conference, he pointedly refused us access. Now we know why. Had our executives been there, they would have been able to tear Mr. Ackman’s premises and interpretation of our business model apart. His misstatements and mistakes are too numerous to address immediately.”
It is yet unclear whether the Federal Trading Commission (FTC) and SEC will initiate an investigation of Herbalife’s business or will instead look at Mr Ackman’s hedge fund for market manipulation.