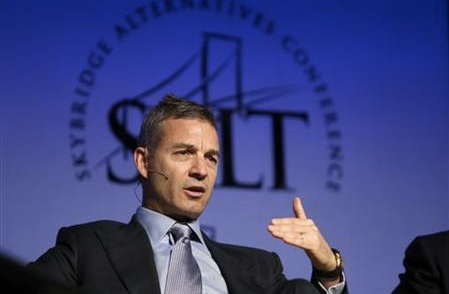 Just three weeks ago famous short-seller Bill Ackman accused Herbalife (NYSE:HLF) of running a pyramid scheme and drove its share price down by 39 percent to $24.96 as a direct result. On Wednesday Dan Loeb, one of the hottest managers on Wall Street, announced that his hedge fund Third Point has accumulated an 8.24 percent stake or a total of 8.9 million shares in the nutritional supplements company.

**Hedge Funds Lock Horns**
Two of the biggest hedge funds in the world went into a direct confrontation over the business model of Herbalife, which distributes nutritional supplements in some 84 countries and is a prominent sponsor of sports, including FC Barcelona and LA Galaxy football clubs.
In December Bill Ackman, in what he called a $1 billion (£624 million) “patriotic short”, sold about 20 million shares of Herbalife or almost a fifth of the company’s floatation. This week Third Point, Dan Loeb’s $9 billion (£5.61 billion) hedge fund, provided support for Herbalife’s share price, which has risen by 11.46 percent since Monday and closed at $39.95 on Wednesday.

Mr Loeb’s disclosure of his position in Herbalife’s stock comes on the eve of a presentation to shareholders and analysts in which the company is expected to rebut, in detail, the allegations made by Mr Ackman. The short-seller said in a statement on Wednesday that he welcomed any investor “who brings additional sunlight to the situation” and that “the outcome of this investment is not about Pershing Square [Bill Ackman’s hedge fund] or anyone else who is long or short the stock”.

According to Nathan Vardi from Forbes magazine Loeb’s move is exceptionally bad news for Ackman as Loeb has never had more credibility with the markets than he does today. Last year he shook things up at Yahoo and helped the company find a promising new chief executive in the hiring of Marissa Mayer. Loeb also made a $500 million (£312 million) profit with a counterintuitive bid on Greek bonds at a time when many feared the country would exit the Eurozone. His main hedge fund comfortably beat the markets last year and one of his funds scored a net return of 35 percent.

!m[Third Point’s Support on Wednesday Boosts Herbalife’s Share Price by 9 Percent](/uploads/story/1172/thumbs/pic1_inline.png)
Dan Loeb in his latest letter to investors regarding Herbalife’s share price:
“The pyramid scheme is a serious accusation that we have studied with our advisors. We don’t believe it has merit…. Applying a modest 10-12x earnings multiple suggests Herbalife’s shares are worth $55-$68, offering 40-70 percent upside from here and making the company a compelling long investment for Third Point.”

Ackman on the other hand offered a detailed 300-slide presentation arguing against Herbalife’s long term viability as a business model but lacks the credibility Loeb has on Wall Street. Ackman’s huge investment in JC Penney looked like a bad bet last year and his short positions of Herbalife have been viewed with suspicion from Wall Street as they were announced just before his hedge fund Pershing Square closed its books for the year. Pershing Square didn’t manage to beat the S&P in 2012 and lost money in the previous year.
The Wall Street Journal reported on Wednesday afternoon that the SEC has opened an inquiry into Herbalife.
**Herbalife’s share price as of 10.01.2013 07.30 GMT was $40.30 (afterhours trading).**