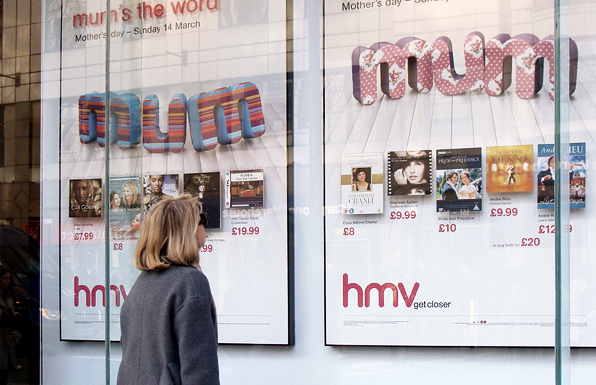 On 15 January HMV (LON:HMV)announced that it had requested suspension of trading of its ordinary shares on the London Stock Exchange in consequence of going into administration, putting 4,500 jobs at risk.

Deloitte, which has been advising HMV’s lending banks, was last night appointed as administrator of the UK’s biggest retailer of CDs and DVDs. HMV said it was “unable to reach a position where it feels able to continue to trade outside of insolvency protection,” but plans to continue operations while seeking a potential buyer for its business.

The High Street music chain opened its first shop in London’s Oxford Street in 1921 but in recent years has been losing business to competition from supermarkets and web retailers such as Apple’s iTunes and Amazon. The group employs more than 4,500 people at 240 HMV stores and nine Fopp outlets. The Guardian reported one of HMV’s suppliers as saying that the firm’s failure was “regrettable but inevitable. They missed the internet boat. Amazon are eating up their physical sales [CDs and DVDs] and iTunes are eating up their digital sales.”

At the end of last week HMV formally asked its suppliers, which include game-makers, film companies and music labels, to put up about £300 million in additional financing to cover debt and fund an overhaul of the company’s business. The proposal was turned down. In contrast, a year ago suppliers proved willing to back HMV, taking a five percent equity stake in the company to secure its position as UK’s top entertainment retailer.

!m[Iconic British Retailers Struggle in the Digital Age](/uploads/story/1213/thumbs/pic1_inline.png)
“It has been a long time coming, but everyone has known that the writing was on the wall since the day someone first downloaded a digital song,” Neil Sundars, managing director of Conlumino, told the Financial Times. “People will be very sad to see [HMV] go because it is a very emotionally connected brand, which most of us have used and have a lot of resonance with. But the truth is it is just not a part of our purchasing habits as much as it used to be.”

On 13 December HMV warned it would probably breach its banking covenants due to continued losses and lower-than-expected Christmas sales. The retailer reported a net loss of £36.2 million in the 26 weeks through 27 October. The company had about £19.1 million in cash in the year ended 28 April 2012 against net debt of £173.4 million. Last week it announced a month-long sale with 25 percent discount on all items in a desperate attempt to attract customers.
HMV’s woes come as bad news for UK shopping centres, which might be left with some more major space to fill as the latest in major retailers goes belly up. Victims of the digital age include established High Street names such as Comet, Woolworths, JJB Sports and, most recently, Jessops. Andrew Sentance, a former member of the Bank of England’s rate-setting committee and a well-known economist and music fan, suggested last night there could be more High Street failures as internet firms eat away at the business of traditional bricks and mortar shops. “Comet & Jessops: now HMV. Is there more trouble in store?” Sentance posted on his Twitter page.
**HMV’s share price as of 15.01.2013, 09.00 GMT, was £0.0110 (Monday’s closing price).**

Anton is a freshly graduated economist from the States with passion for the world of finance. He is one of the more recent additions to the iNVEZZ journalist team and has a particular interest in gold and everything else that shines. When not submerged in the most recent economic news, Anton likes to lurk in tech forums and get into arguments over what’s hip and what’s square.
Related news
Standard Life Aberdeen share price rallies amid FY results and exec changes
13th March 2019
Standard Life Aberdeen share price steady even as RBC flags dividend concerns
12th March 2019
Standard Life Aberdeen share price: Investors eye full-year results this week
11th March 2019
BHP share price: Group approves funding for Gulf of Mexico project
13th February 2019
TUI share price slides as group posts quarterly loss
12th February 2019
Invezz uses cookies to provide you with a great user experience. By using Invezz, you accept our privacy policy.