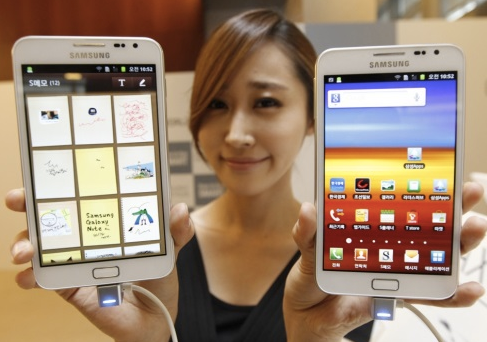 Samsung (KRX:005930) has confirmed that it will be expanding its “phablet” portfolio next month by launching a new sub-brand within its Galaxy range of products, TechCrunch reported on April 11. Galaxy Mega comes with two phablet devices (phones sized as mini-tablets), initially aimed at Europe and Russia.

**Mega times two**
Samsung, the world’s biggest smartphone manufacturer, announced that it is launching a new line of phablets as part of its Galaxy brand, which will be available globally — “beginning May from Europe and Russia”. The South Korean company added that product availability will vary by market and rollouts will be gradual.
The Galaxy Mega sub-brand comprises of with two models sized 5.8 inches and 6.3 inches respectively. Both devices wield dual-core processors, with the 6.3-inch version having a more powerful 1.7 GHz chip compared with its 5.8” counterpart (1.5 GHz). The company statement describes the devices as “ultra-thin and portable enough to put into a pocket or hold in one hand”. Samsung also stated that the Mega brand “offers a mix of popular smartphone and tablet features such as an effortless user experience, a split screen, multitasking between video and other apps and more”.

There is still no information about the price of the new devices but TechCrunch suggested that dual-core chips powering the phablets may be an indication that the devices will be slightly more affordable than the Samsung Galaxy Note II phablet, which uses a quad-core processor.
**Phablet wars**
Samsung is probably trying to capitalise on the growing popularity of big-screen mobile devices such as phablets. As iNVEZZ recently reported (Missing the Big-Screen Trend Could Compromise Nokia’s Recovery) global sales of handsets 5 inches or bigger increased dramatically to 29.7 million units last year from just 1.2 million the year before.

Some of the major players in the phablet market, apart from Samsung, include ZTE Corp. with its 5.7-inch Grand Memo and Huawei Technologies Co., the maker of the 6.1” “giant” Ascend Mate. With its 6.3 inches the bigger model in the Galaxy Mega sub-brand dwarfs both those devices, while the smaller version fits nicely between the two Chinese companies’ offerings.

Fittingly, it was Samsung that initially aroused interest towards big-screen mobile devices with the introduction of the original Galaxy Note in 2011. And now with consumers starting to adopt phablets more widely, the South Korean company is looking to provide them with more choices with Galaxy Mega. The company CEO said in a statement that “we are aware of a great potential in the bigger screen for extensive viewing multimedia, web browsing, and more. We are excited to provide another choice to meet our consumers’ varying lifestyles, all while maintaining the high-quality features of the award-winning GALAXY series”.

!m[A Whole New Galaxy](/uploads/story/1869/thumbs/pic1_inline.png)
**Diversification = success**
The new sub-brand comes as no surprise to those familiar with Samsung’s strategy to release multiple devices every year, targeting different segments of the market. This strategy has been hailed as one of the main reasons for Samsung’s success. In contrast, the company’s biggest rival, Apple Inc., (NASDAQ:AAPL) releases only one product per year, which is aimed at the top end of the price range, thus limiting the number of potential customers.
**Samsung’s share price was KRW 1,540,000.00 as of 15.22 GMT, 11.04.2013**