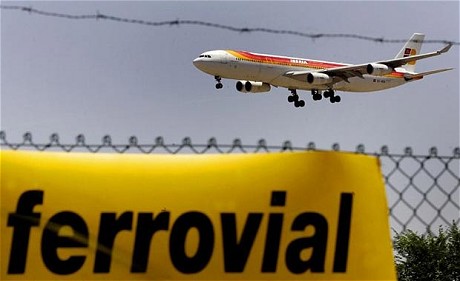 Shares in Spanish construction and infrastructure firm Ferrovial (MCE:FER) edged higher on Thursday, April 25 after the owner of Europe’s largest airport, London’s Heathrow, reported a rise in first-quarter earnings and announced a rise in shareholder payout based on solid performance at its North American toll roads and Heathrow airport.

Ferrovial said in a report that net profit for the first quarter of 2013 had risen to €100 million from €7.6 million in the same period last year as the company received a combined €57 million in dividends from Heathrow and the 407 Express Toll Route (ETR) in Canada.
Earnings before interest, taxation, depreciation and amortisation (EBITDA) rose 10.7 percent quarter-on-quarter at Heathrow, where traffic rose to 16 million passengers for the first three months of the year.

Meanwhile, the 407 ETR increased EBITDA by seven percent, which boosted the company’s quarterly dividend by 14.3 percent. The total EBITDA, however, amounted to €181 million, down 5.9 percent on the first quarter of 2012. Revenues at Ferrovial also declined in the first quarter, falling 1.8 percent like-for-like, to €1.643 billion, with the Spanish company’s domestic construction division continuing to shrink.

Ferrovial’s construction business showed continued weakness in Spain, which is yet to recover from a housing slump, partly offset by growth in the group’s building activity abroad. A decrease in traffic flow whittled away at earnings from its toll motorways division, as well as the booking of extraordinary items in the year-ago period. At its services division revenues shrank at home and abroad, dented by the economic environment. Yet, apart from the strong performance of its main assets – Heathrow and 407 ETR – Ferrovial’s US construction business also performed well, with 46 percent growth. According to its quarterly report, the Spanish company had continued to expand internationally, with new contracts in Poland and Qatar reducing the weight within the group of less profitable activities in Spain.

**Ferrovial Share Price Reflects Investors’ Confidence**
!fm[](/uploads/story/2025/title_pic.png)Ferrovial, which last year sold down 10.6 percent of Heathrow to Qatar Holding and 5.7 percent to CIC international to reduce its debt pile, said that it had halved its debt to €12.9 billion in 2012 from €24 billion in 2008. The Ferrovial share price has risen 13 percent in the year to date. The increase is in sharp contrast with the performance of Ferrovial’s local building competitors which have been struggling since the collapse of Spain’s decade-long housing bubble.
**As of 16:09 ET on April 26 the Ferrovial share price in Madrid was up 0.24 percent at €12.63. The company stock has gained almost two percent since the release of the quarterly earnings report on April 25.**