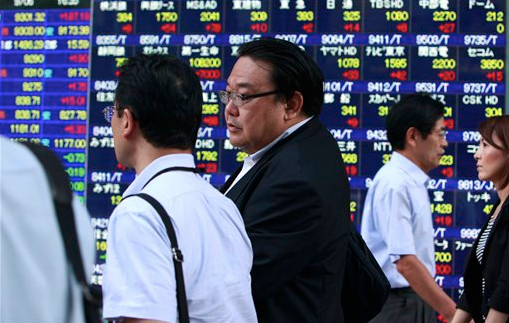 Daiwa Securities Group (TYO:8601) posted on Wednesday, May 1, its highest quarterly profit in seven years on the back of higher brokerage commissions and investment banking fees.

Japan’s second-largest broker by revenue reported a ¥48.8 billion (₤321 million) profit in the three-month period to March 31, more than four times the ¥10.9 billion (₤71.8 million) recorded in the same period a year earlier. The result was higher than the ¥24.3 billion (₤160 million) forecast by a Thomson Reuters survey of two analysts. Net income for the full year to March was ¥72.9 billion (₤480 million), from a loss of ¥39.4 billion (₤259 million) the previous year.

Daiwa’s business was buoyed by a big rally in Tokyo’s stock market over the past five months, with retail investors’ appetite for financial products and especially equities growing sharply. The rebound was largely fuelled by Prime Minister Shinzo Abe’s efforts to stimulate the economy and end deflation.
“Trading activities in Japanese equities by individual investors increased sharply,” Daiwa’s newly appointed chief financial officer Mikita Komatsu said at a news conference as quoted by The Wall Street Journal. Komatsu expects the trend to continue for the time being.

!m[](/uploads/story/2067/thumbs/pic1_inline.png)Japan’s Nikkei index has surged by 60 percent since mid-November as investors poured money into the market on hopes that Shinzo Abe would succeed in reviving the economy. Daiwa is determined to make the best of that new wave of interest, hoping that retail investors will continue taking their money out of low-yielding bank accounts and pursue better inflation-adjusted returns on the stock market.

Daiwa’s overseas operations also delivered satisfactory results with fourth quarter profit of ¥457 million (₤3 million) thanks to cost-cutting measures. Operations in Asian, excluding Japan, still delivered a loss in the quarter but Komatsu said his firm is planning to return the unit to profit in the current fiscal year. The company is not looking to hire more people or make substantial investments overseas, and instead prefers to focus on the domestic market. “We may pick our spots when it comes to investing in opportunities overseas, but you won’t see any major investments,” Komatsu said at an earnings briefing. “We consider it our core mission to expand the investor base in Japan.”

Daiwa’s biggest domestic rival and Japan’s largest broker by revenue, Nomura Holdings (TYO:8604), reported on Friday a ¥82.4 billion (₤542.6 million) net profit for the fourth quarter, it’s best quarterly result in almost seven years. Nomura however remained cautious in its full-year guidance, partly because of its holdings of failed Wall Street bank Lehman Brothers, which has burdened it with a high-cost structure that took years to rein in on. “We are not thinking that these good conditions will carry on forever,” Nomura’s Chief Financial Officer Shigesuke Kashiwagi said on Friday in a company statement.
**Daiwa Securities’ share price was ¥869 as of 01.05.2013, 14.30 GMT.
Nomura Holdings’ share price was ¥773 as of 01.05.2013, 14.30 GMT.**