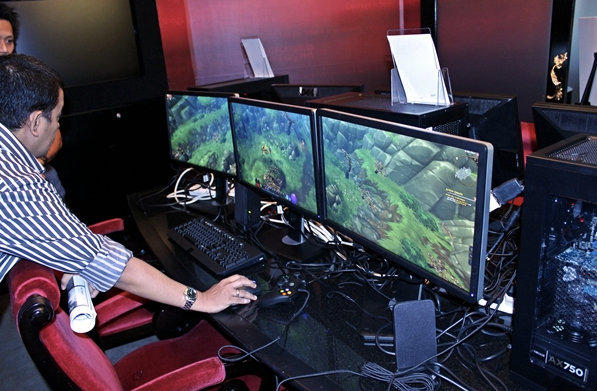 Nvidia Corp. (NASDAQ:NVDA), the U.S. manufacturer of graphics processors, reported on Thursday, May 9, that revenue for the fiscal quarter ended on April 28 had increased to $954.7 million from $924.9 million a year earlier. First-quarter net income was $77.9 million, or 13 cents per share, up from the $60.4 million, or 10 cents a share, in the corresponding prior-year period. Both figures came ahead of analysts’ estimates compiled by Bloomberg for earnings of 10 cents a share on revenue of $940.7 million.

Nvidia said on Thursday it expected that sales would continue to grow to about $975 million in the current fiscal quarter that ends in July. Profit margins would remain largely unchanged from the 54.3 percent reported in the previous three months.
The Nvidia share price gained as much as 3.5 percent to $14.40 in after-hours trading on Thursday in New York following the release of results. The stock closed 0.8 percent higher at $13.91 on Thursday.

**Gaming bolsters revenue amid PC slump**
The global PC sales saw their biggest decline on record in the first three months of 2013, falling by 14 percent according to researcher IDC, but growing revenue at Nvidia suggests that the company had managed to avoid the negative impact of the slump. According to Betsy Van Hees , an analyst at Wedbush
Securities’, demand for powerful gaming PCs had bolstered the chipmaker’s sales in the first quarter, helping it to withstand the slump in the overall PC market. High-end PC users were still willing to pay more for Nvidia’s newest processors to get better graphics in games, San Francisco-based Van Hees has said, as quoted by Bloomberg. As Nvidia’s Chief Executive Officer Jen-Hsun Huang has said, “PC as a platform for gaming is quite vibrant”.

!m[High-End Gaming Machines Help the Chipmaker Avoid the Worst of a PC Slump ](/uploads/story/2204/thumbs/pic1_inline.png)
Taking into account the declining popularity of PCs as opposed to mobile devices, Nvidia has been trying to branch out to other markets. The graphics chip maker has launched its Tegra line of processors for mobile devices, with the latest versions – the Tegra 4 and the Tegra 4i – scheduled to come to the market later in the year.

The company is also developing a handheld device of its own, called Project Shield. Unlike tablets and smartphones, Project Shield is a dedicated gaming device, which will have a physical game controller and will allow for the streaming of games running on a compatible desktop PC or a laptop.
**The Nvidia share price was $14.34 (pre-market) as of 14.21 GMT, 10.05.2013.**

Specialising in economics by academia, with a passion for financial trading, Michael Harris has been a regular contributor to Invezz. His passion has given him first hand experience of trading, while his writing means he understands the market forces and wider regulation.
Related news
BASF swings to £785.65 million of net loss in the second quarter
11th July, 12:03
UK shares recover on Friday after three consecutive days of losses
10th July, 18:58
Honda Motor to get a 1% stake in China’s EV battery manufacturer CATL
10th July, 15:39
United Airlines strikes a tentative deal with its pilots’ union on voluntary furloughs & early retirement
10th July, 14:22
Danish brewer Carlsberg says its H1 operating profit will be stronger than expected
10th July, 13:36
Related market data
Invezz uses cookies to provide you with a great user experience. By using Invezz, you accept our privacy policy.