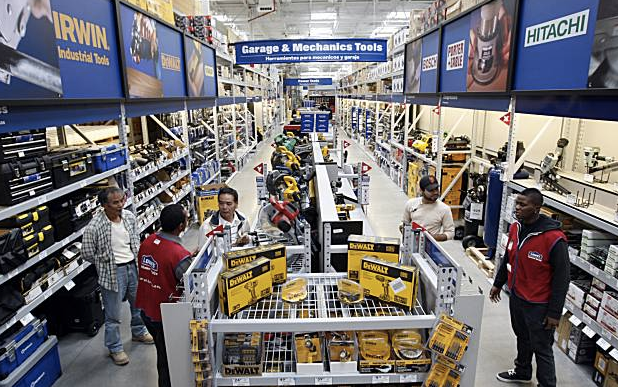 Net profit rose 2.5 percent year on year to $540 million in the quarter ended May 3, or 49 cents a share. Analysts had expected 51 cents per share. At $13.09 billion (0.5 decline year on year) sales also came lower than the projected analysts’ average of $13.45 billion. Lowe’s results were significantly weaker than those of the industry leader Home Depot (NYSE:HD), which reported on Tuesday better-than-expected performance, with sales and profit both beating estimates.

Lowe’s stock price was up 2.05 percent at $43.31 about an hour after the start of Wednesday’s trading in New York. At the same time the Home Depot stock price was at $81.19, up 3.05 percent.
**Lowe’s**
According to Lowe’s Chief Executive Officer Robert Niblock, the company’s performance for indoor categories has been “solid”, but outdoor sales have been hurt by unfavourable weather conditions.

Lowe’s had stocked more lawn and garden products than Home Depot and therefore suffered more from the unfavourable weather, Janney Capital Markets analyst David Strasser opined.
The company has made efforts to improve product selection and customer service by offering low prices and products targeted to specific geographic markets. It has also made its stores more appealing and consumers-friendly, and increased its assortment of products available online. However, Lowe’s larger peer has extended its lead.

“The spread between Home Depot and Lowe’s (same-store sales) expanded in the first quarter, something we had worried might happen,” Strasser said, as quoted by Reuters.
**Home Depot**
!m[Home Improvement Retailer Keeps Trailing Behind Home Depot](/uploads/story/2456/thumbs/pic1_inline.png)
US-based Home Depot Inc. reported on Tuesday upbeat results for the fiscal quarter ended May 5, with sales and earnings both beating estimates. Revenue for the period increased 7.4 percent year-on-year to $19.12 billion, compared with the analysts’ average estimate of $18.68 billion. Net income rose to $1.2 billion, or 83 cents a share, from $1 billion, or 68 cents a share. Analysts had forecast an average of 77 cents a share, according to Thomson Reuters I/B/E/S.