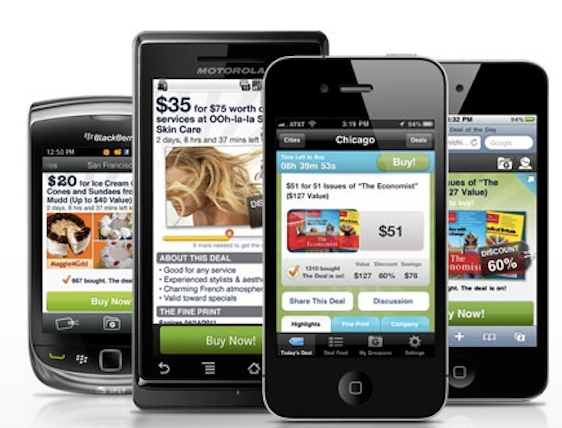 The Groupon share price closed 11.5 percent higher at $7.65 on the NASDAQ of Friday, June 14, after analysts at Deutsche Bank AG upgraded the stock on optimism that sales can be boosted by the company’s mobile application which is increasingly used by consumers. The stock of the operator of the world’s largest daily-deals website has continued its rally today, gaining 1.44 percent to $7.76 in pre-market trading in New York. It has gained about 60 percent so far in the year, outpacing a 14 percent increase in the Standard & Poor’s 500 index.

**Mobile penetration**
Groupon Inc. (NASDAQ:GRPN) started out in 2008 as a service providing e-mail alerts for daily discounts. Since then the company has taken steps to capitalise on the increasing use of mobile devices for web browsing and shopping online. The company’s mobile app is enjoying growing popularity among consumers, which is benefiting sales.

“Groupon is surprisingly the most mobile penetrated e-commerce company we track,” Deutsche Bank analyst Ross Sandler wrote in a research note on Friday, as quoted by Bloomberg.
Sandler upgraded the shares to buy from hold and raised his target price to $10 from $6. He also forecast that the company’s strong sales to mobile customers would result in a 53 percent surge in revenue to $3.56 billion in 2015 from $2.33 billion last year. The forecast is higher than the analysts’ average of $3.04

billion compiled by Bloomberg.
Strong mobile exposure will certainly benefit the company, which generates its revenue by offering consumers discounts, known as Groupons, from businesses such as restaurants and nail salons and then shares the revenue with the businesses.
However, Groupon may be faced with a drop with revenue if consumers become weary of such deals, according to Erik Gordon, a business and law professor at the University of Michigan. Still, Gordon believes that mobile is a better channel for the company as mobile apps are not so easily ignored compared to e-mails. Coupons sold on mobile devices accounted for 45 percent of all transactions in

North America in the first quarter, up from less than 30 percent a year earlier, Groupon said last month.
**Groupon rebounding**
In February, Groupon ousted its CEO and co-founder Andrew Mason following a series of disappointing results that stalled growth at the daily-deals provider. Since then the company has been run by Co-Chief Executive Officers Eric Lefkofsky and Ted Leonsis who have been trying to stabilise it while searching for a permanent replacement of Mason at the helm.

!m[Groupon Inc. (NASDAQ:GRPN) ](/uploads/story/3138/thumbs/pic1_inline.png)
In addition to its push into mobile, the company is aiming to improve services for international customers by integrating companies acquired outside the U.S.
“They were growing so fast, and all these markets were growing on separate platforms,” said Sameet Sinha, an analyst at B. Riley & Co., as quoted by Bloomberg on Friday. “Now, what Groupon is saying is, ‘That’s not going to work. We need to be on one consistent platform.” Sinha has a neutral rating on the shares and a price target of $5.
**The Groupon share price (pre-market) was $7.82 as of 14.23 GMT, 17 June 2013**