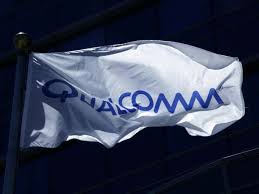 iNVEZZ.com, Thursday, July 25: Qualcomm Inc (NASDAQ:QCOM), the world’s largest seller of processors for mobile phones, posted on Wednesday third-quarter revenue that beat analysts’ expectations and eased concerns that the smartphone market was slowing down. The San Diego-based company’s earnings for the period were in line with expectations, providing a further boost to the positive sentiment for its stock.

The Qualcomm share price rose more than 4 percent to $63.96 as of 15:13 BST.
Qualcomm’s revenue in the fiscal third quarter was $6.24 billion, while net income stood at $1.58 billion, or 90 cents a share, boosted by growing demand for smartphones in Asia. The chipmaker estimated that its revenue over the current quarter ending September would be between $5.9 billion to $6.6 billion.

Analysts surveyed by Thomson Reuters had on average projected revenue at $6.055 billion and $6.293
billion for the third and the fourth quarter respectively.
“This is better than the Street had been girding for, given what’s been going in the smartphone markets,” said Cody Acree, an analyst at Williams Financial, as quoted by Reuters.
Third-quarter Non-GAAP earning were in line with expectations at $1.03 per share.
**The Qualcomm share price was $64.13 as of 15.25 BST, 25.07.2013**