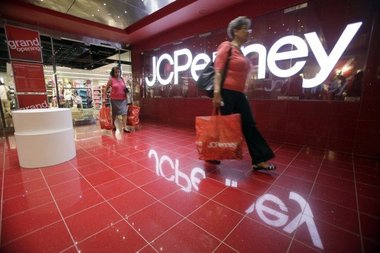 iNVEZZ.com Tuesday, August 20th: JC Penney Company, Inc. (NYSE:JCP) today reported a net loss of $586 million, or $2.66 per share, for its fiscal second quarter ended August 3, 2013. The result exceeded the year-earlier loss of $147 million, or 67 cents a share, and the $1.06-per-share loss forecast by analysts surveyed by Thomson Reuters.

Net sales for the period declined to $2.66 billion, down from $3.02 billion a year ago. The struggling retailer attributed the 12 percent drop in sales to the failure of prior merchandising and promotional strategies.
A drop of only a 2.2 percent was registered in online sales. The company’s jcp.com website has been improving its performance every month during the most recent quarter to reach a 14 percent increase in sales in July, compared to July of 2012.

The company pointed out that comparable store sales improved sequentially by 470 basis points compared to the first three months of 2013. Improvements were recorded on monthly basis during the second quarter as well and the upward trend is expected to continue for the rest of the year.
Fiscal second quarter gross margin dropped to 29.6 percent of sales from 33.2 percent in 2012 due to lower than expected sales and higher level of clearance merchandise sales, the retailer said in its trading update.

CEO Myron E. (Mike) Ullman, III, commented: “Since I returned to jcpenney four months ago, we have moved quickly to stabilize our business – both financially and operationally – and we have made meaningful progress in important areas of the business.”
During the second quarter cash and cash equivalents rose to $1.5 billion from $714 million at the end of the first quarter of 2013, resulting in total available liquidity of $1.85 billion.

**Changes at the Top**
!m[Decline in Sales Slowing Pace after Ullman’s Return](/uploads/story/4961/thumbs/pic1_inline.jpg)
Changes to JC Penney’s board of directors were announced last week. William Ackman, whose Pershing Square Capital Management holds a 17.7 percent stake in the department store chain, stepped down from the Board effective August 12. His decision was announced after he had publicly stated he had lost confidence in the Board.
He was replaced the same day by Ronald W. Tysoe, who has 16 years of experience as Vice Chairman at Federated Department Stores Inc., currently known as Macy’s Inc. Penney’s board reaffirmed its support to current CEO Ullman.
**JC Penney’s stock price was at $13.77 as of 20.08.2013, 14.47 BST.**