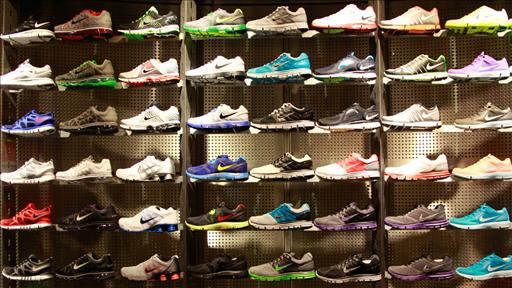 iNVEZZ.com, Friday, September 27: The Nike share price surged to a record in yesterday’s extended trading after the US sportswear giant posted upbeat results for the first quarter of its fiscal 2014. The company’s profit surged, surpassing analysts’ forecasts and revenue also increased helped by strong sales in North America.

In extended trading, Nike shares yesterday rose 6.3 percent to $74.80, after having closed 2.06 percent higher at $70.34 in New York.
**Beating estimates**
Nike Inc (NYSE:NKE) said yesterday that net income in the three-month period ended August 31 had surged 38 percent to $780 million from $567 million a year earlier. Earnings per share from continuing operations were 86 cents, above the analysts’ forecast of 78 cents per share, according to data compiled by Bloomberg.

The company’s gross margins widened to 44.9 percent from 43.7 percent, marking the third consecutive quarterly increase after nine consecutive declines mostly caused by rising labour costs. Margins had benefited from a fall in the prices of raw materials, lower discounts and growth in the higher margin Direct-to-Consumers business, the company said. Analysts had been expecting to see a slight increase to 43.8 percent.

Revenues increased by 7.7 percent to $6.97 billion, beating, albeit slightly, the analysts’ average estimate of $6.96 billion. The company’s performance was particularly strong on the North American market, where sales increased 9.4 percent to $3.14 billion.
“A number of things are firing on all cylinders,” Paul Swinand, a Morningstar Inc. analyst in Chicago, said in an interview with Bloomberg. “Almost everything across the board is strong.”

**China sales keep falling**
Orders for the Nike brand scheduled for delivery between September and January had increased by 10 percent, excluding currency changes, the company said.
!m[Earnings beat analysts’ estimates](/uploads/story/5746/thumbs/pic1_inline.jpg)
Overall, Nike’s revenue rose in all regions, with the only exception being China. Revenue from the Asian country excluding currency fluctuations fell three percent to $574 million. This was the fourth consecutive decline in sales in the People’s Republic, which has been one of the fastest growing markets for Nike. Orders in China excluding currency fluctuations rose two percent, compared with forecasts of a 0.5 increase.
“I’m not sure if the problems in China are behind them,” Swinand said. “It’s not getting worse.”
**As of Thursday buy Nike shares at $75.47**
**As of Thursday sell Nike shares at $75.00**