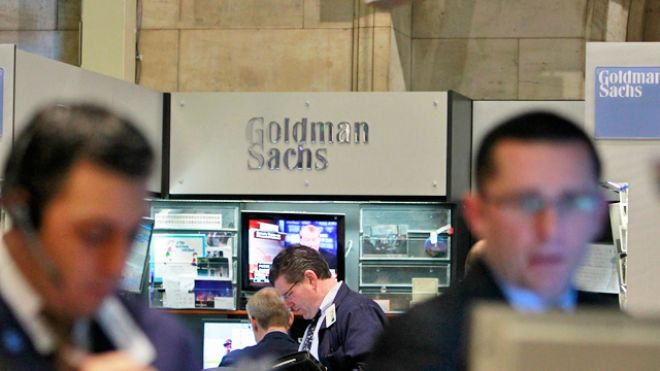 iNVEZZ.com, Thursday, November 7: Goldman Sachs Group Inc (NYSE:GS) today said that it was under investigation by regulators probing the potential manipulation of foreign-exchange rates. In addition, the bank also disclosed that US enquiries into the way it had packaged and sold mortgage bonds ahead of the financial crisis might result in a ‘significant increase’ in the company’s legal costs. Goldman Sachs’ share price has been little changed in early morning trading in New York today.

**Goldman Sachs under investigation**
In its quarterly filing with the US Securities and Exchange Commission, Goldman Sachs said that investigators were looking at the company’s “trading activities and communications in connection with the establishment of benchmark rates”. The bank noted that it was “cooperating with all such regulatory investigations and reviews”.

Trade these shares now through Hargreaves Lansdown from £5.95 per deal.
UK peers Barclays and Royal Bank of Scotland Group as well as UBS, Citigroup and JPMorgan have already noted that they are being investigated by authorities examining the $5.3 trillion-a-day foreign-exchange market and that they are cooperating with regulators on the investigations. Last week, Barclays suspended six traders as part of an internal probe related to the forex investigation conducted by the UK’s Financial Conduct Authority (FCA). (Barclays share price: Bank suspends six traders in forex probe).

The Financial Times quoted an unnamed source familiar with the matter as suggesting that Goldman Sachs’ cursory disclosure might reflect the bank having a lesser role in the investigation.

Goldman Sachs is also being probed over its commodities trading. As the FT has noted, metals users have accused the lender of pushing up the price of aluminium by the practices it uses in its warehouses.

‘Significant increase’ in legal liabilities
In the same filing, Goldman Sachs disclosed that the ongoing investigations by members of the Residential Mortgage-Backed Securities Working Group of the US Financial Fraud Enforcement Task Force could result in “a significant increase in the firm’s liabilities for mortgage-related matters”.
The Wall Street Journal noted that the working group of federal and state agencies was formed by President Obama in 2012 to probe banks’ sales of mortgage bonds ahead of the financial crisis.
**As of 14:52 UTC, buy Goldman Sachs shares at $163.55.**
**As of 14:52 UTC, sell Goldman Sachs shares at $163.50.**
Trade these shares now through Hargreaves Lansdown from £5.95 per deal.
Prices can go up and down meaning you can get back less than you invest. This is not advice. Dealing services provided by Hargreaves Lansdown.

Alice joined the Invezz team after motherhood convinced her to make a career change from actuary-ing. She brings a forensic eye for detail developed through crunching numbers on underwriting satellite insurance and the like.
Related news
Lufthansa to cut 1,000 admin jobs and 20% of leadership positions to combat COVID-19
7th July, 13:24
Plus500 reports an almost 300% increase in H1 revenue on robust trading volumes
7th July, 12:00
Halfords’ cycling sales jump 57.1% as people avoid public transport amidst COVID-19
7th July, 11:02
Whitbread stock price plummets over 4% on declining sales
7th July, 10:40
JD Sports warns of a significant hit in fiscal 2021 due to COVID-19
7th July, 10:17
Related market data
Invezz uses cookies to provide you with a great user experience. By using Invezz, you accept our privacy policy.