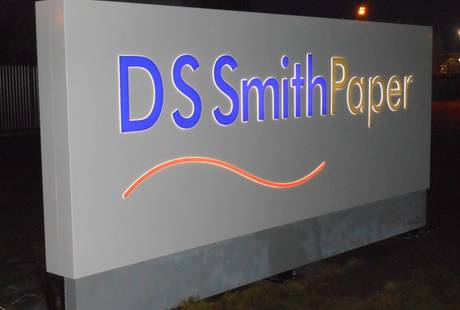 iNVEZZ.com, Thursday, December 5: Shares in DS Smith (LON:SMDS) rose nearly seven percent today after the UK-based manufacturer of recycled packaging for consumer goods posted upbeat half-year results and lifted interim dividend payout. DS Smith’s share price jumped 6.9 percent to an intra-day high of 319.6p, but eased slightly to trade at 317p as of 13:25 UTC, up 6.02 percent from yesterday’s close. It was the third biggest gainer on the FTSE 250 Midcap Index, which rose 0.51 percent by the same time.

The company, which supplies corrugated packaging to Unilever (LON:ULVR), Procter & Gamble (NYSE:PG), and Nestle (VTX:NESN) among others, posted a profit before tax and after exceptional items of £85 million for the six months to the end of October, up 52.3 percent year-on-year. Adjusted operating profit grew 31 percent to £160.2 million and EBITDA margin improved by 40 basis points to 7.7 percent, despite pressure from higher input costs. The growth in earnings was supported by a 24.5 percent rise in revenue to £2.08 billion and by positive currency swings. Some 17 percent of the growth in operating profit and 17.7 percent of the increase in revenues were attributed to the inclusion of a full six months results from SCA Packaging, the Swedish peer acquired in July 2012. Like-for-like corrugated box volumes expanded by 2.2 percent, ahead of the company’s own target of GDP plus one percent thanks to strong performance in the focus areas – Germany, Central and Eastern Europe. DS Smith, which was set up in the 1940s in East London, is now present in 25 European countries, employing around 20,000 people.

“The good volume growth reflects market share gains from a strengthened customer proposition, driven by innovation and removing complexity and cost from our customers’ supply chain,” CEO Miles Roberts said in a statement. “We continue to expect further good progress over the remainder of the year, despite ongoing challenging market conditions,” he added.

The Board raised the interim dividend by 28 percent to 3.2p per share, saying it is committed to a progressive dividend and confident in the outlook for the group. The dividend will be paid on May 1, 2014 to ordinary shareholders on the register at the close of business on April 4.
**Analysts on DS Smith**
JPMorgan reiterated today its ‘overweight’ rating on DS Smith with a price target of 355p. Prime Markets also repeated its ‘buy’ recommendation on the stock with a price target of 325p. Investec raised its price target to 350p from 340p, maintaining its ‘buy’ recommendation. The company has a consensus rating of ‘buy’ and an average target price of 308.91p according to a survey of 14 analysts published by Analyst Ratings Network.
Citi sees an upside potential for DS Smith’s shares on a 12 month basis, “driven by ongoing synergies, an improving trading environment and consolidation opportunities,” according to a note quoted by Reuters.
**As of 13:25 UTC buy DS Smith shares at 317.00p.**
**As of 13:25 UTC sell DS Smith shares at 316.80p.**