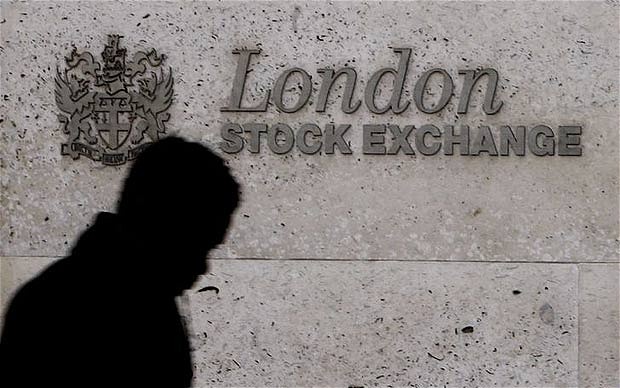 Data released by the Office for National Statistics showed that Britain’s economy grew 0.7 percent in the fourth quarter, easing from a 0.8 percent expansion in the previous three months, but in line with expectations. Full-year GDP growth accelerated from 0.3 percent in 2012 to 1.9 percent last year, the highest in six years. However, total output is still 1.3 percent below the pre-financial crisis peak reached in the first quarter of 2008.

“The GDP figures are a further confirmation that the UK economy is on the recovery which increases investor confidence and is a positive for UK stocks,” Manish Singh, head of investments at Crossbridge Capital, told Bloomberg.
Earlier today, the Confederation of British Industry (CBI) said that Britain’s economic output grew in January at its fastest pace since September 2007, strengthening hopes that last year’s economic recovery will continue this year.

Emerging markets steadied today after being hit by large fund outflows in the previous three trading days, with some analysts saying that jitters had turned into panic over increasing concerns of an economic slowdown and a looming credit crunch in China, a further reduction of the US monetary stimulus programme and domestic political issues in countries like Turkey and Ukraine.

As of 13:37 UTC the Footsie was up 0.2 percent at 6,563.22, after losing 4.2 percent in the past five sessions amid a broad-based sell-off, triggered by the emerging market turmoil and valuation concerns.
**Individual moves**
Today’s biggest gainer so far, has been Aberdeen Asset Management (LON:AND), which regained some ground after suffering heavy losses from its large exposure to emerging markets. Aberdeen’s share price rose 2.9 percent to 402.8p as at 13:35 UTC.

Among other gainers, British-American cruise operator Carnival Corporation & Plc (LON:CCL, NYSE:CCL) was buoyed by an upbeat update from rival Royal Caribbean (NYSE:RCL) and a positive broker comment. Numis Securities raised its recommendation on the company to ‘buy’ from ‘hold’ and lifted its price target on the stock to 3,000p from 2,250p, saying it remains positive on the scope for yield and earnings recovery. Carnival’s share price rose 1.9 percent to 2,524p.
Royal Bank of Scotland (LON:RBS) pared most of yesterday’s losses, which came after it announced half an hour before the market close that it is setting aside an extra ₤3.05 billion in provisions to cover costs related to litigation and customer compensation claims. Analysts estimate that the extra provisions would push RBS into an annual pre-tax loss of nearly ₤8.0 billion (RBS share price falls on ₤3 billion of fresh provisions). The RBS share price, which fell 2.2 percent yesterday, had gained 2.3 percent to 339.9p by 13:38 UTC.
AMEC (LON:AMEC) rose 1.7 percent to 1,037p after announcing a $974 million (£586 million) contract with BP (LON:BP) related to the development of the Shah Deniz gas field in the Caspian Sea (AMEC share price: ATA consortium awarded $974m contract by BP).

British Land Company (LON:BLND), the UK’s second largest real estate investment trust (REIT), was bid up 0.6 percent to 666p after reporting solid quarterly results (British Land share price rises on robust Q3).
ARM Holdings (LON:ARM), which provides chip licenses for Apple (NASDAQ:AAPL), led the losers after the US tech giant reported lower-than-expected first quarter iPhone sales and announced a revenue forecast for the second quarter which was below market expectations, renewing fears about demand for the company’s products in China (Apple share price slides on missing iPhone sales and Q2 revenue forecast). ARM’s share price slid 2.7 percent to 931.5p.
The second biggest loser so far has been Mexican silver and gold miner Fresnillo (LON:FRES), which fell 1.6 percent to 762.5p after reporting lower-than-expected full-year gold output (Fresnillo share price: 2013 silver production ahead of guidance). The miner’s silver production was ahead of guidance, but uncertainty over the explosives ban at its major Herradura and Soledad mines continues to weigh on the stock.
Trade stocks with Hargreaves Lansdown from £5.95 per deal.
Prices can go up and down meaning you can get back less than you invest. This is not advice. Dealing services provided by Hargreaves Lansdown.