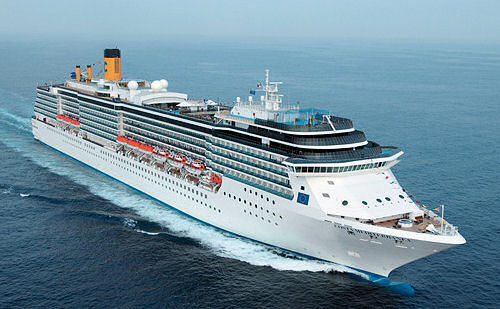 Frank joined Carnival Corporation in 1998 and has held various positions, including chief operating officer and vice chairman. In November he stepped down to assume the role of special advisor to the CEO and to the chairman of the group. Frank is also Chairman of the Executive Committee of the Cruise Lines International Association (CLIA), the world’s largest cruise industry trade organisation. In his new role, he will support Costa Crociere’s CEO Michael Thamm.

Costa Crociere, which operates the 65-year-old Costa Cruises, AIDA and Iberocruceros brands, is the only Italian-flagged cruise line. It has the largest fleet in Europe with a total of 14 ships in service and one new ship to be delivered in October.
With 101 ships that carry more than 10 million passengers a year, Carnival is the world’s largest cruise company, listed in London and New York, and included in both the FTSE 100 and the S&P 500 blue chip indices.

**Carnival share price**
Carnival’s London-listed shares rose 3.4 percent last year, underperforming a 14.4 percent rise in the FTSE 100 Index. The company was hit by a series of problems in the past two years including a fire on one of its Caribbean cruises last February and the 2012 fatal disaster involving its Costa Concordia ship, operated by Costa Crociere. The stock gained ground at the end of last year after the cruise operator announced better-than-expected full-year results after taking measures to strengthen its brand (Carnival share price climbs on better-than-expected results).

In today’s trading, Carnival’s share price was up 1.0 percent at 2,574p as of 11:30 UTC, compared to a 0.3 percent rise in the Footsie.
Yesterday, Carnival’s stock jumped 2.8 percent, buoyed by an upbeat update from rival Royal Caribbean (NYSE:RCL) and a positive broker comment. Numis Securities raised its recommendation on the company to ‘buy’ from ‘hold’ and lifted its price target on the stock to 3,000p from 2,250p, saying it remains positive on the scope for yield and earnings recovery. The brokerage also increased its 2014 earnings per share forecast by 13 percent.

According to a survey of analysts published by Analyst Ratings Network, Carnival has a consensus rating of ‘hold’ and an average target price of 2,199.46p. Six research analysts have a ‘hold’ rating on the stock, six have it as a ‘buy’, and four call it a ‘sell’.
**As of 11:16 UTC buy Carnival shares at 2,573.00p.**
**As of 11:16 UTC sell Carnival shares at 2,571.00p.**
Trade stocks with Hargreaves Lansdown from £5.95 per deal.
Prices can go up and down meaning you can get back less than you invest. This is not advice. Dealing services provided by Hargreaves Lansdown.