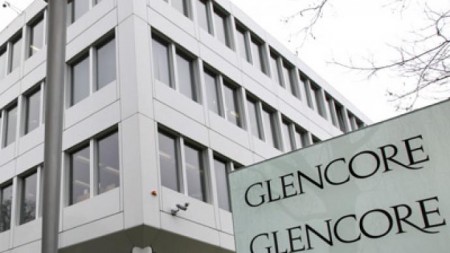 iNVEZZ.com, Thursday, February 13: Glencore Xstrata plc (LON:GLEN) and Macquarie Group Ltd. (ASX:MQG) are said to have pulled out of the race for the Australian refining and marketing business of Royal Dutch Shell Plc (LON:RDSA), according to a Bloomberg report yesterday .

Quoting insiders, Bloomberg said that a consortium led by Vitol, the world’s largest independent oil trader, remained in the bidding process. According to one of the sources, the tie-up of Glencore and Macquarie would be open to restarting talks with Shell if the oil giant’s negotiations with the Vitol-led group fail.
The Australian Financial Review reported last month that Macquarie, bidding together with Glencore, was one of two remaining parties vying for Shell’s Australian oil refinery and filling stations. The pair was reportedly up against a group comprising Vitol and the Abu Dhabi Investment Council (Shell share price: Race for Aussie assets reportedly down to two suitors).

Glencore’s share price yesterday closed 1.29 percent higher at 337.15p in London, valuing the diversified natural resource giant at £44.87 billion. Shell’s share price closed at 2,114p, down 1.38 percent.
The assets put up for sale by Shell include an oil refinery in Geelong, south of Melbourne, storage terminals and filling stations. They were valued at A$2.7 billion (£1.45 billion) in a Deutsche Bank report last month. According to one insider, a deal may be reached as early as this month.

Glencore is also eyeing energy assets in Nigeria offered for sale by Shell and another two oil majors. Reuters reported yesterday that Glencore and Swiss oil trader Mercuria, are among the shortlisted consortia expected to place final bids on the assets worth about $3 billion (£1.8 billion) that Shell, France’s Total (EPA:FP) and Italy’s Eni (BIT:ENI) are selling.

Shell is selling its 30 percent stake in four oil blocks, while Total and Eni are disposing of their respective stakes of 10 percent and five percent. The remaining 55 percent interest is owned by the Nigerian National Petroleum Corporation. Shell is also looking to divest the 97 kilometre Nembe Creek oil pipeline. According to an insider, final bids for the stakes in the oil blocks are expected by February 18.

Glencore is reportedly preparing to bid in a consortium with a Nigerian firm or firms. Nigeria, keen to increase local oil and gas ownership, requires foreign companies that want to buy divested assets to team up with local firms in the bidding process. Commodity trading houses have been marketing Nigeria’s crude oil and importing fuel there for decades. New upstream acquisitions would help strengthen their relationship with Africa’s biggest oil producer, a key supplier to Europe and India.
**As of Wednesday buy Glencore shares at 337.35p**
**As of Wednesday sell Glencore shares at 337.20p**
Trade stocks with Hargreaves Lansdown from £5.95 per deal.
Prices can go up and down meaning you can get back less than you invest. This is not advice. Dealing services provided by Hargreaves Lansdown.