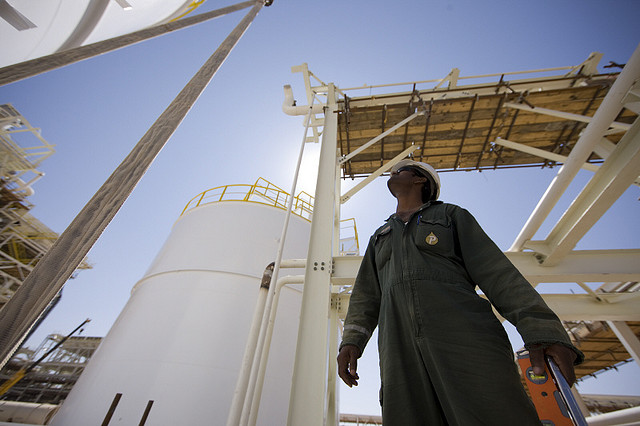 iNVEZZ.com, Tuesday, May 27: Royal Dutch Shell Plc (LON:RDSA) is in talks to buy a stake in a liquefied natural gas (LNG) project in southern India, Reuters has reported.

Shell’s share price has been little changed in London trading today, having inched 0.06 percent lower to 2,351.50p as of 14:22 BST.
**Southern India LNG project**
Reuters yesterday quoted B.C Tripathi, chairman of India’s GAIL Gas, as saying that Shell was in talks with the government of the Andhra Pradesh state for buying up to 24 percent in the planned Kakinada LNG project.

GAIL Gas, a subsidiary of state-run GAIL, is a co-promoter of Andhra Pradesh Gas Distribution Company (APGDC) which will build the project in the southern Indian state.
“Shell is in talks with the Andhra Pradesh government for a stake in the project,” Tripathi told reporters, as quoted by Reuters, adding that up to 24 percent was available.
APGDC will hold 50 percent in the future LNG project, while Gaz de France will have a 26 percent interest, leaving the balance for a new partner.

Shell already operates the Hazira LNG terminal in the State of Gujarat on India’s west coast with a 74 percent stake. Shell’s partner in the venture is France’s Total (EPA:FP) which holds the remaining 26 percent.
**Commitment to Russia**
In a separate development, Reuters on Friday quoted Russia’s Energy Minister Alexander Novak as saying that Shell, along with US energy giant ExxonMobil Corp (NYSE:XOM), had confirmed its commitment to Russia and was eager to continue working in the country.