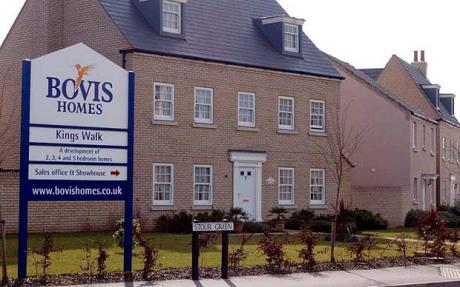 The company, which has benefitted from recent government schemes designed to boost the housing sector, saw its pre-tax profit climb by 166 percent to £49.4 million.
“In the first half of 2014 the group has delivered a record number of legal completions leading to a 150 percent increase in operating profit,” Bovis’ chief executive David Ritchie commented in the statement, adding that the increase was “the result of the compound positive effect of increased volumes, improved average sales price and stronger profit margins”.

Ritchie also reiterated the group’s full-year forecast, noting that Bovis expected to deliver “a significant increase in profits in 2014 in line with our expectations”.
Bovis increased its interim dividend by 200 percent to 12 pence per share and noted that it intended to pay a dividend of ‘at least’ 35 pence per share in 2015.
**Analysts on Bovis Homes**

The Financial Times today quoted Glynis Johnson, analyst at Bovis house broker Deutsche Bank, as saying in a note that the “sharp increase” in the dividend was a “positive surprise”.

Aynsley Lammin, analyst at Citi, told the FT that Bovis’ first-half results came in “better than expected” with the group’s profit before tax of £49.4 million beating Citi’s estimate of £45 million.

Lammin also added that the higher than expected dividend outlook “should also provide valuation support” for the company’s shares and “enhances the prospective return to shareholders”.
The 13 analysts offering 12-month price targets for Bovis Homes for the FT have a median target of 990.00p, with a high estimate of 1,250p and a low estimate of 885.30p. As of August 15, the consensus forecast amongst 27 polled investment analysts covering the stock advises that the company will outperform the market.
FTSE 100 rival Persimmon (LON:PSN) is scheduled to release its first-half results statement tomorrow.
**As of 10:22 BST, buy Bovis shares at 849.50p.**
**As of 10:22 BST, sell Bovis shares at 847.50p.**