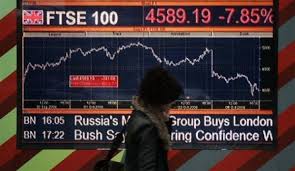 iNVEZZ.com, Thursday, September 11: The FTSE 100 seems set for a higher opening today, tracking gains in the US and Asia.

The UK benchmark index fluctuated yesterday on concerns over when the US Federal Reserve might start to raise key interest rates and the upcoming independence vote in Scotland. The gauge finished the session 0.02 percent, or 1.11 points, higher at 6,830, bouncing off an intraday low of 6,800.04 reached early on.
According to trading platform IG, the Footsie will open today a further 19 points up at 6,849. On the corporate front, under the spotlight today will be grocer Wm. Morrison Supermarkets (LON:MRW) and clothing retailer Next (LON:NXT), which are both due to release interim results.

Investors will continue to keep an eye on the Scottish referendum which is due to take place a week today. A new poll published yesterday indicated that support for the independence vote had backed off as compared with last weekend’s YouGov survey. The Daily Record poll gave the ‘no’ side a five point lead at 47.6 percent with 42.4 percent indicating an intent to vote ‘yes’ to independence.

Traders also need to digest the overnight news of US President Barack Obama’s statement to the nation that he has authorised US air strikes for the first time in Syria, plus more attacks in Iraq, in a broad escalation of a campaign against the Islamic State militant group.
***US stocks rebound***
US stocks rose yesterday, rebounding after the S&P 500‘s largest decline in a month, with social media shares helping lift the technology sector and investors pondering when the Fed will start hiking interest rates.

***Asian stocks mixed***
Asian indices have been mostly higher today, reflecting the positive handover from Wall Street, after key economic data from Australia and China showed mixed results.
Japan’s Nikkei 225 has surged to a near eight-month high, rising for a fourth straight session as the yen traded near a six-week low against the US dollar. As of 06:32 BST, Tokyo’s benchmark index was 0.75 percent, or 125.07 points, higher at 15,913.85.
The risk-averse mood fuelled by Obama’s speech, however, has pushed MSCI’s broadest index of Asia-Pacific shares outside Japan slightly lower. By 06:34 BST, the gauge had lost 0.11 percent, or 0.64 points, to 597.52.