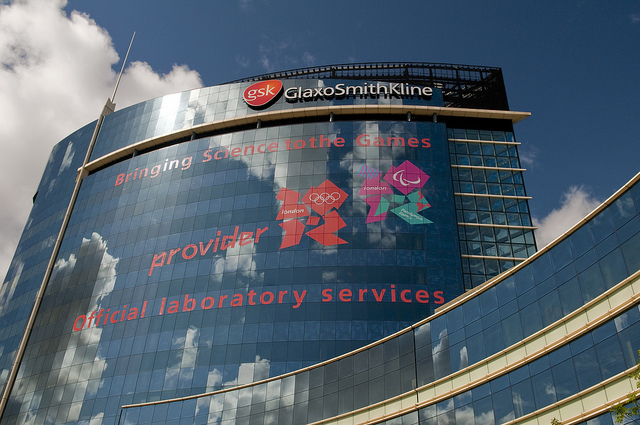 iNVEZZ.com, Wednesday, October 22: Shares in GlaxoSmithKline Plc (LON:GSK) have jumped about three percent today since the FTSE 100 drugmaker said that it was planning to return £4 billion to investors via a special share scheme.

GSK unveiled the return of capital plan alongside third-quarter results which showed a drop in sales and profits. The company also announced that it was looking at floating off a minority stake of ViiV Healthcare,  GSK’s joint venture with US drugmaker Pfizer Inc (NYSE:PFE) and Japan’s Shionogi & Co Ltd (TYO:4507).
As of 13:40 BST, GSK’s share price had gained 2.90 percent intraday to 1,380.95p.

**Third-quarter results**
GSK reported in a statement today that its third-quarter turnover had dropped three percent year-on-year on a constant exchange rate basis, to £5.6 billion. Sales of pharmaceuticals and vaccines declined three percent in the period, weighed down by a 10 percent drop in the United States, where the group’s flagship respiratory drug Advair has been facing pricing pressure.

By contrast, sales in China jumped 65 percent, to £69 million, following the conclusion of a bribery probe into GSK’s operations which resulted in a £297 million fine for the UK drugmaker. ()

GSK’s core operating profit for the quarter declined one percent on a constant exchange rate basis to £1.89 billion, while earnings per share rose five percent to 27.9p.
The UK drugmaker said that its full-year dividend would be three percent higher, while next year’s dividend was expected to be maintained at the same level with an additional planned return of £4 billion to shareholders via a B-share scheme.

**ViiV Healthcare IPO**
GSK also announced today that it was considering an initial public offering (IPO) of a minority shareholding in its HIV-focused unit, ViiV Healthcare, “to enhance future strategic flexibility and visibility within the group”.
“This will provide greater visibility of the intrinsic value we see in [ViiV Heathcare’s] currently marketed assets and future pipeline and also enhance potential future strategic flexibility,” GSK’s chief executive Andrew Witty said in the statement.
GSK also unveiled a new restructuring programme which it projects to deliver about £1 billion in savings over the next three years, with around 50 percent expected in 2016.
**Ebola vaccine update**
The pharmco also provided an update on its Ebola vaccine candidate, noting that it was “working hard” to develop a potential vaccine.

Reuters quoted CEO Witty as telling reporters today that he expected to have “the initial supply … available before the year end”.
Last week, the drugmaker said that development of the compound was “progressing at an unprecedented rate,” with initial data from early-stage trials to be available by the end of the current year. ()
Reuters today reported that Johnson & Johnson (NYSE:JNJ), which is also developing an Ebola vaccine, had discussed collaboration with GSK to produce at least one million doses of its two-step vaccine next year.
“I have spoken with Andrew Witty over the past few days several times as colleagues on how we are going to solve this,” J&J’s head of research Paul Stoffels told the media. “It might even be that we have to combine their vaccine with ours.”
**As of 14:04 BST, buy GSK shares at 1385.50p.**
**As of 14:04 BST, sell GSK shares at 1385.00p.**