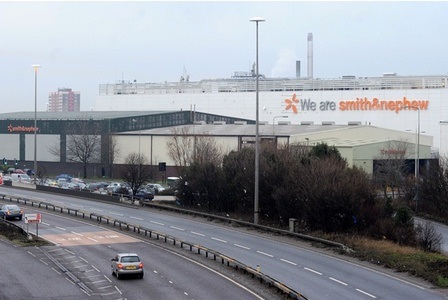 iNVEZZ.com, Tuesday, November 25: US implants maker Stryker Corp (NYSE:SYK) is mulling a new bid for London-listed Smith & Nephew (LON:SN), Bloomberg has reported. Stryker is reportedly evaluating an offer ahead of the upcoming expiry of a cooling-off period which prevents it from approaching the UK group.
Smith & Nephew’s share price jumped 4.40 percent on the news to close at 1,138p in London yesterday.
*h*Stryker mulls new bid*h*
Bloomberg yesterday quoted unidentified people familiar with the matter as saying that Michigan-based Stryker was discussing the financing of a bid for Smith & Nephew, as well as potential antitrust hurdles with advisers. The sources noted that the London-based artificial knees and hips maker was aware of Stryker’s interest but cautioned that the US drugmaker could still decide against a bid.

In May, Stryker was forced to admit that it had no plans to bid for its UK rival after a report in the Financial Times sent Smith & Nephew’s share price soaring to record highs in London trading. (Smith & Nephew share price: Stryker denies bid speculation) The US company’s statement, however, triggered a cooling-off period preventing it from approaching Smith & Nephew for six months. That standstill period is due to expire this Friday.
Bloomberg quoted the sources as reporting that Stryker was considering structuring the transaction as a tax inversion allowing it to move its legal address to the lower-tax UK. While the Obama administration in September moved to clamp down on tax inversion deals, the people explained that the US group saw strong strategic reasons to pursue a combination aside from tax advantages, and an inversion would not be essential to make the deal work.
The Telegraph yesterday quoted Morgan Stanley analysts as saying that a merger would slow the US company’s annual growth, which currently stands at around five percent compared with Smith & Nephew’s three percent. The newspaper also reported that Bernstein have put the chances of a merger at more than a third, saying that a tie-up could help cut costs at a time when the industry is facing intense pricing pressure.
*h*Analysts on Smith & Nephew*h*
As of November 22, the consensus forecast amongst 44 polled investment analysts covering Smith & Nephew for the FT has it that the company will outperform the market.
Analyst Ratings Network reports that the artificial hips and knees maker currently has a consensus ‘hold’ rating and an average price target of 1,070.47p.
**On Monday, November 24, buy Smith & Nephew shares at 1,142.00p.**
**On Monday, November 24, sell Smith & Nephew shares at 1,141.00p.**