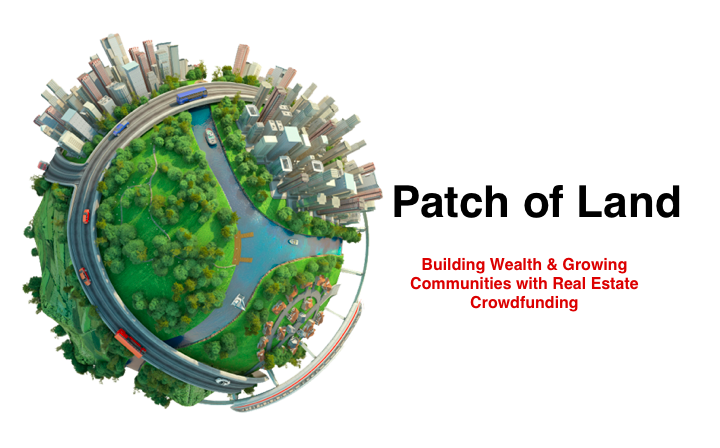 Californian real estate crowdfunding company, Patch of Land, recently announced that it has secured $23.6 million (£15.9 million) in its first attempt to seek financing.

The oversubscribed Series A round was led by SF Capital Group, a private investment firm focused on direct equity and debt investments in the financial technology space. Neil Wolfson, President of SF Capital Group will join the Board of Directors at Patch of Land as part of the financing deal. Ron Suber, the President of fellow California-based peer-to-peer lending company Prosper Marketplace, also participated in the round of financing as a strategic investor.
The finance raised far exceeds the $17 million that the company claims to have raised for real estate projects since its 2013 inception. Increased investor confidence in the real estate crowdfunding sector is becoming ever more apparent. Only last year rival company, Fundrise raised a record $31 million in financing from firms such as Ackman-Ziff Real Estate Group.
However, Patch of Land is slightly different to Fundrise, in that the company focuses solely on lending to those looking to invest in real estate developments. Since 2013, the firm has provided one-year residential purchase options and rehab loans of under $1 million. However, the company is now intending to put the $23 million of capital to good use and expand its range by originating loans between $1 million and $5 million. Terms of three to five years will also be introduced, alongside commercial and new-construction loans, according to CEO Jason Fritton. Furthermore, a significant amount of the funds raised will be used to recruit new employees such as loan officers, underwriters and processors. Fritton commented:
“We are very pleased to have completed this round of financing. We look forward to working with SF Capital Group and welcome Neil to our board. Neil and Ron understand marketplace lending and their collective advice and network of contacts will be integral to our continued growth and success.”

Michael is a freelance writer with years of experience writing about financial products. During his time reporting for Invezz, Michael focused on the real estate and stock markets.
Related news
Blackstone wants to own facilities where TV and films are produced
29th June, 19:52
Rightmove warns of another £17 million to £20 million hit to its revenue due to COVID-19
23rd June, 11:29
Intu Properties names KPMG as administrator if it fails to strike a debt standstill deal with creditors
23rd June, 10:17
Capco invests £436 million to purchase Hong Kong tycoon’s 20.9% stake in Shaftesbury
1st June, 09:31
Intu Properties seeks standstill agreements with creditors to avoid default
18th May, 10:48
Invezz uses cookies to provide you with a great user experience. By using Invezz, you accept our privacy policy.