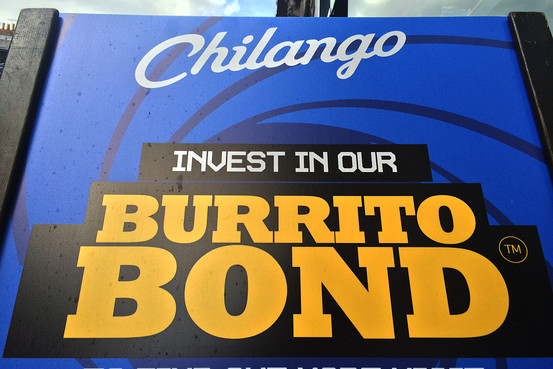 Last year, Mexican restaurant chain Chilango launched the first ever mini bond campaign via equity crowdfunding platform, Crowdcube. The company sought a total of £1 million to enable the business to open further restaurants across London in return for an eight percent interest rate offered to all investors. By the time the campaign closed, 709 investors sought to avail of the opportunity, allowing ‘The Burrito Bond’ to raise double the amount initially sought.

Last month investors received their first bi-annual interest payments, with a total of £65,120 paid out by Chilango. The mini bond has a term of four years, after which, investors can either claim their initial investment capital back or choose to renew the bond under the same terms.
Following the success of Chilango’s investment pitch, canteen and deli company, River Cottage, also sought to raise £1 million through its Crowdcube bond offer. In an effort to secure sufficient funding to expand across the South of England, the company proposed a seven percent annual interest rate on funds invested under a five-year term. River Cottage achieved its target thanks to 285 investors and rolled out its first interest payments last month. A total of £27,818 in dividend payments was paid by the company along with a 10 percent discount at three of its canteens and free River Cottage membership.
Crowdcube has launched five separate mini bonds over the course of the last year, with each one achieving large amounts of funding and one or two surpassing the amounts required. Currently property developer, Pocket, aims to raise £1 million through Crowdcube. The mini bond offers a 7.5 percent interest rate to investors and the listing is already overfunding at £1,481,500 with six days left on the clock, highlighting the rapidly growing interest in crowdfunding investment platforms, not least in the area of residential property investment.
Speaking on the success of its mini bond offerings, Crowdcube co-founder Luke Lang commented:
“Crowdcube brought bonds online, making them easier for investors to access and breaking down the barriers to entry for established but fast-growth businesses like Pocket that want their customers to be part of their future success. We’ve helped growing businesses raise more than £7.7 million through our mini-bonds over the last 7 months and we’re pretty pleased with the pace of new bond products being launched with more in the pipeline.”

Michael is a freelance writer with years of experience writing about financial products. During his time reporting for Invezz, Michael focused on the real estate and stock markets.
Related news
Venture Capitalist Runa Capital closes third round of funding
7th May, 09:05
Lifetise surpasses fundraising target of £250,001
3rd May, 10:51
Land Betterment Corporation embarks on fundraising for sustainable start-ups
3rd May, 08:58
Former Uber Exec to set up startup funding HQ in London
1st May, 12:33
JP Morgan seeks up to £8 billion for Alternative Investments
29th April, 09:11
Invezz uses cookies to provide you with a great user experience. By using Invezz, you accept our privacy policy.