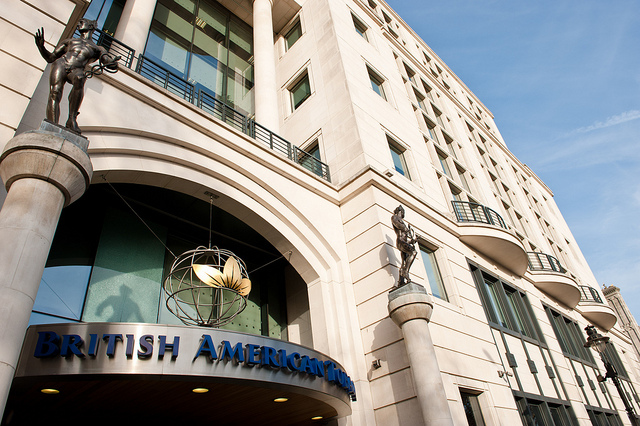 British American Tobacco Plc (LON:BATS) today reported its financial results for the first quarter of 2015, revealing that sales volume and overall revenues have dropped, although the company remained positive, insisting it had “performed well despite the challenging trading environment”.

BAT’s shares had lost 1.10 percent to 3,629.00p as of 12:41 BST today, having earlier in the session dropped as much as 2.4 percent. The company underperformed the FTSE 100 index, which was mostly flat on the day. BAT’s stock is still up more than three percent year-to-date and four percent on an annual basis.
BAT reported that revenue at constant rates of exchange grew by 1.7 percent driven by strong pricing, but on current rates revenue was down 5.8 percent. The company said its good volume performance in markets such as South/Central Asia and Mexico was more than offset by declines in countries such as Brazil, Russia and Vietnam. BAT also noted strong growth by its five “Global Drive Brands” cigarettes.
Meanwhile, Vype continued to “deliver excellent organic growth in the UK e-cigarette market, the company said, adding that it remains on track to launch the product in other countries later this year.
BAT reaffirmed that it expects profit growth to be “significantly weighted” to the second half of the year, primarily due to the timing of price increases.
“The Group continued to perform well in the first three months of the year despite the challenging trading environment,” BAT’s chief executive Nicandro Durante commented. “I remain confident that we will deliver another year of good earnings growth at constant rates of exchange, with performance significantly skewed to the second half of the year.”
As of 13:08 BST, Wednesday, 29 April, British American Tobacco plc share price is 3,614.00p.