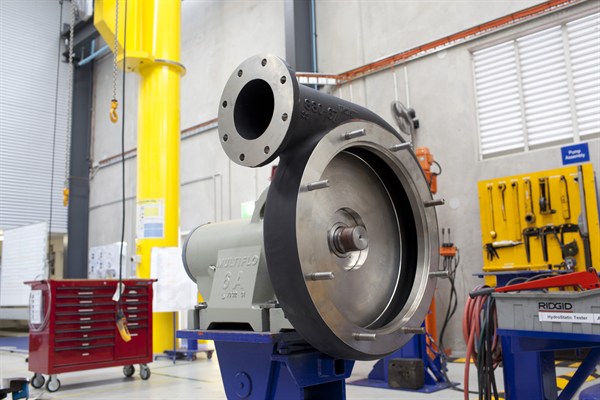 The Weir Group Plc (LON:WEIR) has fallen to the bottom of the FTSE 100 leaderboard after warning that its full-year revenue and profit would be more weighted towards the second half, with a drop in orders and weak trading weighing on the company’s second-quarter performance. As of 10:10 BST, Weir’s share price had fallen 2.60 percent to 1,872.00p, underperforming the broader market. Shares in the company have lost nearly a third of their value over the past year.

In a statement ahead of a capital markets day in London, the Glasgow-based engineer said that its Oil & Gas division had continued to experience ‘a sequential decline’ in activity in April and May, with divisional order input over the first five months of the year falling 34 percent year-on-year. Weir, which makes valves and pumps for the energy and mining industries, said that it had experienced weak trading in its upstream businesses, reflecting falling drilling and completion activity.
“These trends, combined with the progressive realisation of benefits from the Group’s efficiency measures, are expected to contribute to Group full year reported revenue, margins and profit being weighted more towards the second half than in prior years,” Weir said in the statement.
Reuters today quoted UBS as saying that the overall tone of the update suggested “a possibly tougher Q2 than management had thought”.
“Some improvement is expected in H2, but the statement will likely create some small downside risk to consensus EPS,” the analysts added.
Today’s update comes after earlier this year Weir reported a 23 percent fall in orders for oil and gas in the first three months of the year and said that it expected the decline to continue into the second quarter. At the time, the company revealed that it was planning to make an additional 125 job cuts, expected to result in a further £10 million of cost savings.
As of 10:55 BST, Wednesday, 10 June, The Weir Group PLC share price is 1,877.00p.