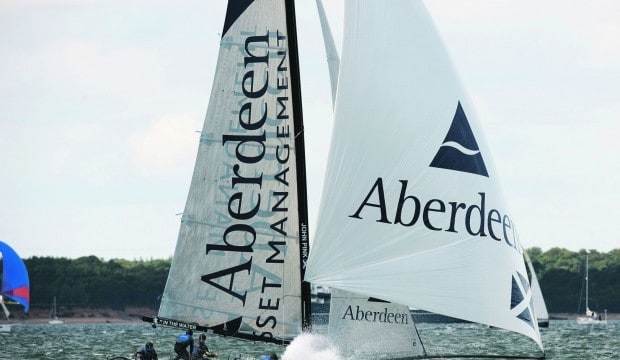 Aberdeen Asset management Plc (LON:ADN) has continued to experience outflows during the final three months of the year, but the company’s Q1 trading update today showed some improvement in the company’s results compared to the previous quarter.

The company said today that it had seen net outflows of £9.1 billion, with £6.3 billion withdrawn from its equities funds. This was an improvement from the three months to September 30, when Aberdeen reported total net outflows of £12.7 billion (£7.9 billion from equities funds).
The FTSE 100 firm also saw a slight increase in assets under management to £290.6 billion, from £283.7 billion as of September 30. The increase was supported by positive market and currency movements, which contributed £8.5 billion to the company’s assets, while the acquisitions of Arden Asset Management and Advance Emerging Capital in December added further £7.5 billion.

“Like the rest of the industry we continue to contend with the structural imbalances of the global economy and the cyclical slowdown in emerging markets, as well as the impact of falling oil and commodity prices,” Aberdeen’s chief executive officer, Martin Gilbert said in the update.
During a conference call following the report, Gilbert told reporters that “I don’t think the fortunes of the company will turn around until we see markets such as China recover, India recover, emerging markets recover”. “It could be a long haul from here,” he added, as quoted by Reuters.
In a separate statement today, Aberdeen announced that its chairman Roger Cornick intended to retire at the end of the fiscal year. He will be succeeded as by Simon Troughton, who is currently the senior independent non-executive director on the board.
In today’s trading, Aberdeen shares were up one percent at 235.10, as of 10:25 GMT. The stock has fallen 18.6 percent since the start of the year and the company’s share price currently stands at just over £3 billion.
The 17 analysts offering 12 month price targets for Aberdeen have a median target of 275.00p, with a high estimate of 425.00p and a low estimate of 211.00p. As of January 23, 2016, the consensus forecast amongst 20 polled investment analysts covering Aberdeen had it investors to hold their position in the company. The same consensus estimate has been maintained since April 14, 2015, when the sentiment of investment analysts deteriorated from “outperform”.
As of 11:04 GMT, Wednesday, 27 January, Aberdeen Asset Management plc share price is 233.55p.