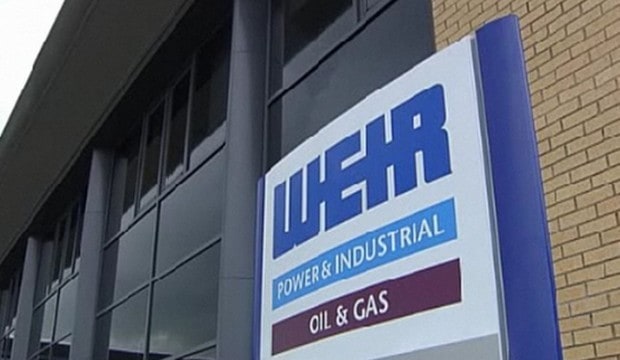 Weir Group Plc (LON:WEIR) shares slid more than four percent today after the company reported that pre-tax profit for 2015 had slid 46 percent on an annual basis to £220 million.

The order book for last year totalled £1.88 billion, down 24 percent from 2014, while revenue fell 22 percent to £1.92 billion. Operating profit was down 43 percent to £259 million, with the margin shrinking 490 basis points to 13.5 percent.
Across the product portfolio, in Minerals, which accounts for more than half of earnings, the company saw operating profit slide 13 percent to £198 million. Oil & Gas earnings were down 74 percent to £58 million, as the dramatic slump in oil prices forced E&P companies to cut budgets and shelve projects.

The company noted that it has been “aggressively” responding to market conditions, with 2015 annual cost reductions totalling £110 million, while a further £40 million in savings are targeted for 2016. Net debt fell four percent to £825 million.
However, despite the slumping earnings, Weir decided to maintain the final dividend payout at 29p, with EPS-to-dividend ratio at 1.8 times.
“Despite market challenges which are unprecedented in recent years, Weir has delivered a resilient performance in Minerals, maintained leadership and market share in Oil & Gas, and created an additional platform for growth with the new Flow Control division,” chief executive Keith Cochrane said.
“Given ongoing market conditions, 2016 will be another challenging year. As a result, we are planning for a further reduction in constant currency Group operating profits, driven primarily by lower activity levels in upstream oil and gas markets.”
Weir’s share price had dropped 3.61 percent to 869.00p as of 12:24 GMT today, well below the FTSE 100 which was also downbeat at 1.4 percent in the negative. In the year-to-date, Weir is down more than 13 percent, which compares with a six-percent drop for the FTSE.
As of 12:54 GMT, Wednesday, 24 February, The Weir Group PLC share price is 867.75p.