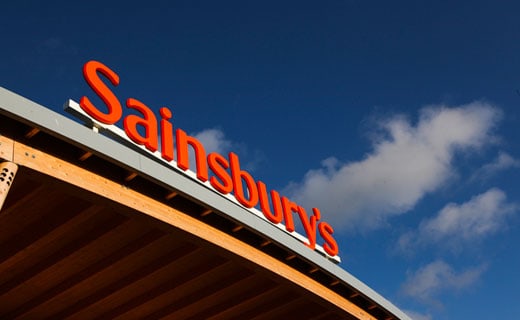 Shares in J Sainsbury (LON:SBRY) have inched lower in today’s session, ahead of the supermarket’s fourth-quarter update tomorrow, when the company is expected to post a small dip in sales. The results will come after industry data recently showed that the grocer had returned to sales growth in the 12 weeks ending February 26.

As of 14:17 GMT, the FTSE 100 index had inched 0.07 percent lower to 271.00p, underperforming the broader London market, with the benchmark FTSE 100 index having climbed into positive territory and currently standing 0.16 percent higher at 7,369.68 points. The group’s shares have lost more than two percent of their value over the past year, but are up by more than eight percent in the year-to-date.

Sainsbury’s is scheduled to post a fourth-quarter update tomorrow, and Belfast Telegraph reports that analysts at Bank of America have pencilled in a 0.3-percent dip in like-for-like sales at the company.
“Overall Sainsbury has been lagging the remaining Big Four peers, and Kantar suggests this will continue in the fourth quarter,” the bank’s Xavier Le Mene said, as quoted by the newspaper.

Kantar Worldpanel revealed last week that Sainsbury’s had returned to growth in the 12 weeks ending February 26 for the first time since March last year, with sales up by 0.3 percent. The group’s market share, however, slipped by 0.3 percentage points leaving the grocer with 16.5 percent of the market.
The 15 analysts offering 12-month price targets for Sainsbury’s for the Financial Times have a median target of 255.00p on the shares, with a high estimate of 305.00p and a low estimate of 200.00p. As of March 11, the consensus forecast amongst 19 polled investment analysts covering the blue-chip supermarket advises investors to hold their position in the company.
As of 14:55 GMT, Wednesday, 15 March, J Sainsbury plc share price is 271.40p.