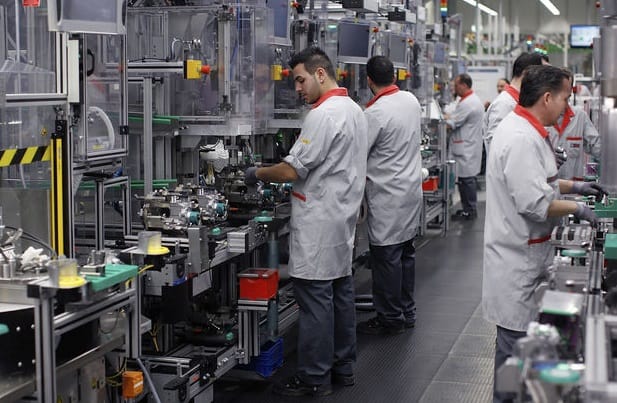 German statistics office, Destatis, said Monday that industrial production hit 2.6% on the month on August, the strongest monthly gain since July 2011. The press release also showed that output in July was 0.1% lower than in June.

The strong gain came as production of capital goods, consumer goods and intermediate goods – parts required for other products – all rose in August. Energy production was also higher in August, adding to the strong performance.

However, construction production was lower than in July, the press release showed.

The healthy level of output bodes well for German GDP growth. The manufacturing industry, including construction, accounts for around 30% of Germany’s economic output. And, with around half of the country’s industrial output business reliant on exporting, the data also suggests demand for German-made goods remains healthy.

Indeed, data from Federal statistics office Friday showed new manufacturing orders surged 3.6% in August from July. That was up from a 0.4% decline in July.

German GDP grew 0.6% in the second quarter of 2017, just down from a 0.7% increase in the first three months of the year. The German Government will announce its latest economic estimates on GDP, inflation and employment, Wednesday.

Elsewhere around midday Monday, the Eurostoxx 50 index was also stronger, buoyed by the German performance and also by a recovery in some Spanish stocks, as the Catalonian crisis eased a little.

While Catalonian leaders still seem set on a declaration of independence, France is the latest country who has stated it wouldn’t be officially recognised.

On Tuesday, Carles Puigdemont, the Catalan president, is expected to bring the results of the recent referendum to the regional parliament. Exactly what Puigdemont will say at that event, is as yet unclear.

Meanwhile, a huge unity rally was held in Barcelona Sunday, with reports suggestion at least 350,000 attended. Spanish Prime Minister Mariano Rajoy has stated he won’t rule out anything that’s within the law, to bring an end to Catalan secession.