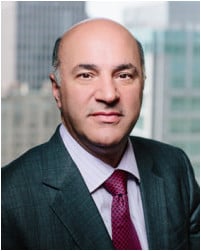 Famous for his straight-talking advice on US reality show, ‘Shark Tank’, O’Leary, also known for his shrewd investments, announced on CNBC Squawk Box earlier this week that he is very ‘excited’ about his involvement in an upcoming $400 million coin issuance for real estate asset associated with a ‘prestigious brand hotel’ in New York.

Unlike other ICOs, where digital tokens are sold with no ownership of a company, the upcoming coin issuance will see a proportion of the hotel tokenized and available to the public to part-own. It will work similarly to stocks and shares, except for the non-existence of an initial public offering (IPO) and, as O’Leary said: “Instead of a share or stock, it’s a coin.”

Distribution will be delivered on smart contracts through the blockchain, making investors part-owners of a third of the hotel.

Tied into a non-disclosure agreement, Mr O’Leary remained tight-lipped on the details but said that he had been working on the project for the last two months, adding that: “If it works, it will be the first of its kind.”

During the discussion on the programme, where he appeared as guest co-host, O’Leary described the venture as a ‘big deal coming to this city’.

The self-named ‘Mr Wonderful’ said that the ICO is fully approved by the SEC (US Securities and Exchange Commission) – the federal agency that protects investors. He said that the key is to go to the regulator and say: ‘I want to work with you, I don’t want to tear the world apart, I want to be regulated, I want to do this by the rules. Adding that he simply wants to ‘make money’.

During the conversation, O’Leary also commented that he believed eventually small cap stocks will be replaced by ICOs as means of raising funds for businesses.