FTSE 100 watch: Footsie stays in the red after US jobs report 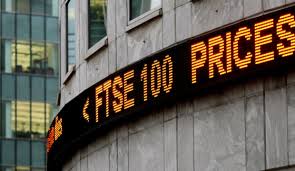 The UK benchmark index has slipped marginally into the red in today’s session, pressured by the latest developments over a trade war between the US and China. The FTSE 100 has remained in negative territory following the release of the latest US jobs report which fell short of expectations.

As of 14:03 BST, the Footsie had given up 8.85 points to stand 0.12 percent lower at 7,190.65. The blue-chip index has been under pressure today after US President Donald Trump signalled tariffs on a further $100 billion of Chinese imports. The FTSE 100 has stayed in the red after the Bureau for Labour Statistics reported that the world’s biggest economy had added 103,000 new jobs last month. IG had previously reported that forecasts were for 203,000 new jobs.

“Year-to-date euro zone equities have outperformed their UK counterparts by more than four percentage points, and we no longer see the catalysts for further outperformance,” UBS Wealth Management’s Chief Investment Officer Mark Haefelem wrote, as quoted by the newswire.

Marks & Spencer (LON:MKS) meanwhile has been the index’s biggest faller in percentage terms after Citigroup named the retailer as one of its least preferred stocks alongside Next (LON:NXT), Pets at Home (LON:PETS) and B&M European Retail Value (LON:BME). Proactive Investors quoted the broker as commenting that investors should buy online retailers over bricks and mortar stocks with consumers increasingly opting to use the internet for shopping. Marks & Spencer’s share price is 1.31 percent down at 270.40p, while shares in Next are changing hands 0.48 percent in the red at 4,797.00p.