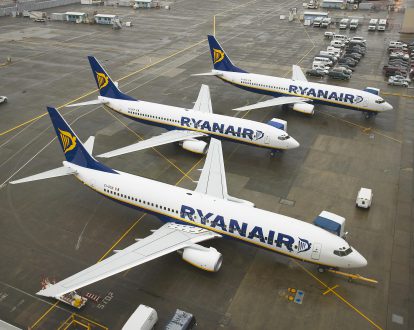 Ryanair shares opened in the red Friday, as the budget airline has had to cancel some 400 flights due to industrial action by pilots based in Germany, the Netherlands, Sweden, Ireland and Belgium. The Irish airline said it has worked hard to resolve the dispute. Affected customers have been contacted.

By 0845 BST, Ryanair share were 1.07% lower at €13.40. The stock has been moving broadly lower in recent weeks as strike action has continued to dog the budget airline during the peak holiday season.

Ryanair announced Wednesday that it had cancelled 250 flights due to a strike by German pilots. The action was called by the Vereinigung Cockpit union, with just two days’ notice after negotiations between the two failed to make satisfactory progress.

“We regret the decision of the VC to go ahead with this unnecessary strike action given that we sent through a revised proposal on a Collective Labour Agreement (on Fri 3 Aug) and stated our intention to work towards achieving a CLA together,” said Ryanair’s chief marketing officer Kenny Jacobs.

“We also invited VC to meet us on Tuesday (7 Aug) but they did not respond to this invitation,” he added.

Additional flights were cancelled once action from other country-based pilots was also confirmed.

According to the VC union, however, pilots remain unhappy with remuneration and working conditions at the airline.

“During negotiations Ryanair categorically ruled out any such increases. At the same time, Ryanair has not shown any interest to find solutions. It is only Ryanair, which is responsible for the escalation which has now taken place,” Locher adds.

VC added that simultaneous strike action would take place by pilots from Belgium, Ireland and Sweden.

Ryanair took to Twitter Thursday to apologise for the strike action affecting passengers from five of its 37 markets.

“Ryanair took every step to minimise the disruption and we notified our customers as early as possible advising them of their free move, refund or reroute options,” Ryanair said in a tweet.

“We want to again apologise to customers affected by this unnecessary disruption and we ask the striking unions to continue negotiations instead of calling anymore unjustified strikes.”