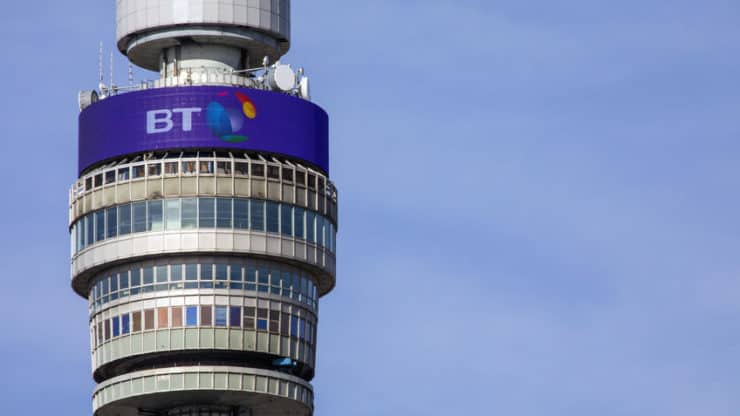 Jefferies argues that BT Group’s (LON:BT.A) payout to shareholders is ‘well covered’ and that cutting it would be ‘illogical,’ Proactive Investors reports. The comments came after the former telecoms monopoly recently updated investors on its full-year performance, posting a drop in revenue while maintaining its dividend.

BT’s share price has been steady in London in today’s session, having added 0.52 percent to 204.30p as of 14:18 BST. The stock is marginally outperforming the broader UK market, with the benchmark FTSE 100 index currently standing 0.45 percent higher at 7,344.03 points. The group’s shares have added less than one percent to their value over the past year, as compared with about a 6.5-percent drop in the Footsie.

Jefferies, which rates BT as a ‘buy,’ lowered its price target on the shares from 340p to 325p today. Proactive Investors quoted the broker as commenting that  there was a ‘highly credible prospect’ that the blue-chip company will return to EBITDA (underlying earnings) growth next year which should ease any concerns.

“[The] decision to keep dividend policy unchanged shows the new CEO’s confidence in the business after his due diligence. It would be illogical (and is not necessary) for BT,” the broker pointed out in a note to clients, adding that its “overriding impression is that BT under its new CEO is a lot more focused on delivering goals that will endure over the long-term”.

Jefferies further reckons that ‘within limits,’ the near-term challenges, such as pressure on forecasts and the share price, could assist BT in discussions with industry regulator Ofcom.

Other analysts on blue-chip telco

Numis also reaffirmed the former telecoms monopoly as a ‘buy’ yesterday, without specifying a target on the BT share price. According to MarketBeat, the blue-chip telco currently has a consensus ‘hold’ rating and an average price target of 266.82p.

Tsveta van Son is part of Invezz’s journalist team. She has a BA degree in European Studies and a MA degree in Nordic Studies from Sofia University and has also attended the University of Iceland. While she covers a variety of investment news, she is particularly interested in developments in the field of renewable energy.
Related news
HSBC cites low returns as it discontinues its industrial metals business
3rd July, 12:14
Land Securities to reinstate dividend as demand recovers quickly at its shopping centres
3rd July, 10:48
General Motors vehicle sales decline by 5.3% in China between April and June
3rd July, 09:51
Lemonade Inc. hits £2.40 billion market valuation as it opens 75% up in U.S. market debut
2nd July, 17:46
Novartis to pay over £583 million to settle U.S. charges of illicit incentives to doctors and patients
2nd July, 14:31
Invezz uses cookies to provide you with a great user experience. By using Invezz, you accept our privacy policy.