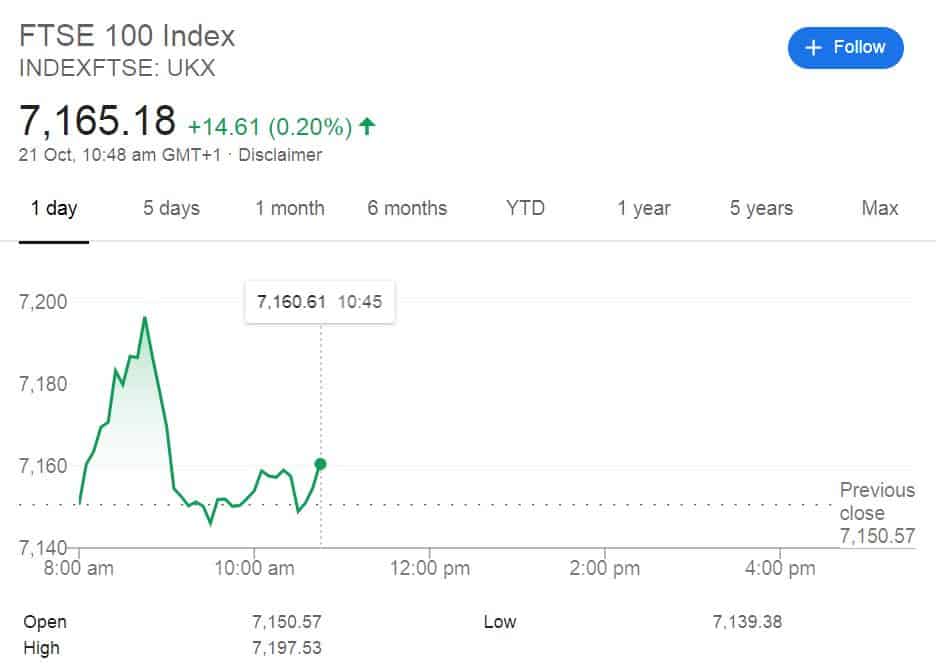 The Brexit derived volatility continues to keep the financial markets on the toes with uncertainty quite evident in the FTSE 100 index. The market opened at 7,150.57 level this morning, October 21st, 2019. The first hour of the trading session was dedicated to an upward rally with the index making a high of 7,196.42. The hike was immediately followed by a drop to even below the opening level. The market is currently trading at 7,154.27 after having made a daily low of 7,146.27 so far.

The meaningful vote on the Brexit deal in the UK’s Parliament was previously delayed following the passage of the Letwin Amendment on Saturday. There are, however, reports of the Johnson Administration pushing for it today, October 21st, 2019. PM Johnson is pushing hard to realize the deal by the current deadline of October 31st, 2019. In compliance with the Benn Act following the members voting in favor of the amendment, however, sources from Parliament have highlighted that PM Johnson has sent a letter to the EU to request for an extension on Brexit.

In the business-level news, NMC Health was reported to have gained 2.5% after an announcement that double-digit can be expected in bottom-line growth. Following the recommendation of Deutsche bank, Pearson (London based multinational publishing and educational company) has also improved by 1.5%.

The demerger of Prudential from its investment manager, M&G has been completed. Following the demerger, Prudential was highlighted to have experienced a downward adjustment by 10%. According to the financial analysts, however, the adjustment was entirely technical.

As per the early trading session on Monday, Just Eat’s share prices have fallen by 3% owing to the incapacity to spark interest in the investors.

Financial Statements To Be Released Today

Businesses like Bioventix and Gfinity are expected to release their annual financial statements later today. Trifast has also announced its interim performance review this morning. Sources have also stated that Mattioli Woods, CPL, and Clipper have declared their Annual General Meetings (AGMs) to be held on October 21st, 2019.

The largest miner of the world, BHP, is expected to begin copper operations in Chili in 2021. In order to cater to the supply requirements, it has finalized the deal for multiple renewable energy contracts (four in total). The energy costs in response are being expected to reduce by 20%.

Shell Egypt has declared on Sunday that it plans on expanding gas exploration in offshore Egypt. The onshore upstream assets located in the Western Desert of Egypt will, therefore, soon be sold.

The recent news by Sunday Times has accentuated that Mr. Graham Prothero, the current CEO of Galliford, has announced his imminent departure from the British builder.