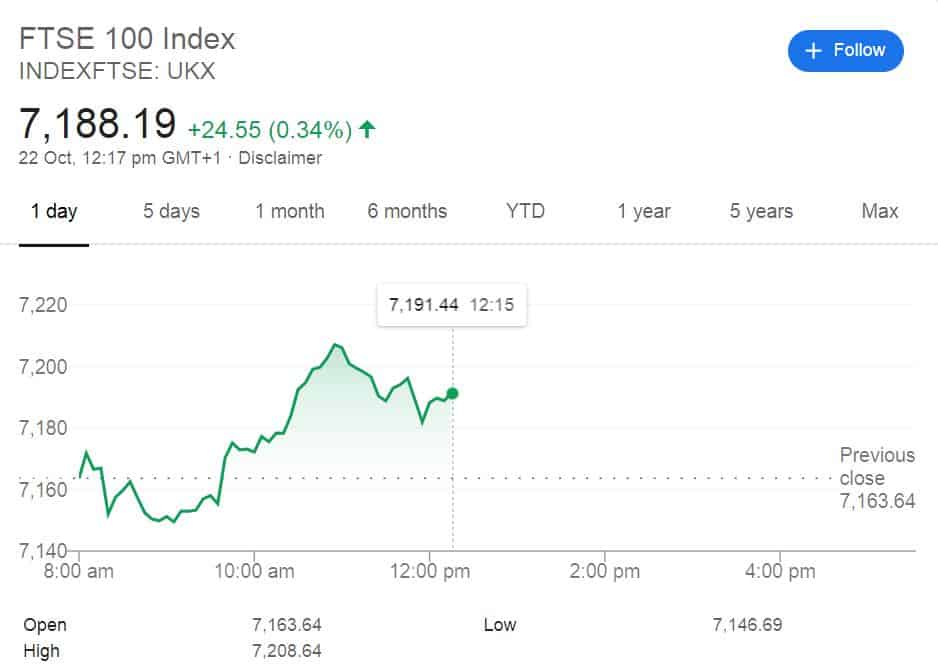 While the Brexit associated uncertainty is at an all-time high, the persistent comments from Trump administrations regarding the U.S – China trade negotiations proceeding in the right direction are helping the FTSE 100 index advance its upward rally. The market opened at 7,163.64 level on Tuesday, October 22nd, 2019. Following a brief decline to 7,149.47, the index has been upbeat and has made a daily high of 7,207.12. Footsie is currently trading at 7,191.44 level.

UK’s House Of Commons To Vote On Withdrawal Agreement Bill

As per the financial analysts, however, all eyes are set on the Second Reading vote on PM Johnson’s Withdrawal Agreement Bill in the House of Commons set for later today (19:00 GMT +1). A major movement or a clearer hint at the market’s intention for the upcoming weeks can be expected after the voting result is out.

Among the individual businesses expected to be market movers for today, TUI AG has been reported to have experienced a rather steep decline of 5.1% on Tuesday. Reckitt Benckiser has also declared its performance review for the third quarter earlier this morning. Having missed the target for full-year sales, the share for British multinational consumer goods company suffered a loss of around 5%.

Following the Q3 financial statement on Tuesday, Anglo-American has come forward as the star performer of the FTSE 100 index so far with a gain of 1.3% for the day. In pursuit is the Whitbread stock that has so far been able to present around 0.8% gain on October 22nd, 2019.

Miners were previously reported to be under pressure in the past week. The start of this week has, however, highlighted a slow recovery in such stocks. Antofagasta is being observed on Tuesday as the leader in this league with a gain of 1.5% for the day so far.

Other businesses that are expected to announce their financial statements today include Essensys and Georgia Capital (full-year earnings report). Travis Perkins and Bunzl PLC will also be releasing the Q3 trading statements later in the day. St. James Place and Gear4Music Holdings are also anticipated to make an important business announcement on Tuesday.

Traders are also recommended to keep an eye on the annual group meetings (AGMs) that are being held by McBride, and Accrol Group on October 22nd, 2019.

Other than the Brexit related voting in the UK’s Parliament, CBI industrial trends survey, public sector net borrowing report for the UK, existing home sales for the U.S, and China’s policy decision are among a few of the other factors that are forecasted to impact the market.