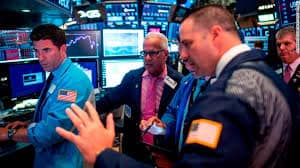 In the morning trade on Thursday, Asian markets were mixed following the release of disappointing economic data across the region.

The Shanghai Composite inched up 0.1% by 02:47 GMT, while the SZSE Component gained 0.4% as investors shrugged off data that showed China’s economy slowed further in October.

Industrial output rose 4.7% in October from the previous year, compared with a median estimate of 5.4%. Retail sales rose 7.2%, also below the forecast of a 7.8% increase.

Fixed-asset investment slowed to 5.2% in the first ten months, compared to the expected 5.4%

The Hang Seng Index dropped 1%. This week, Hong Kong stocks were under and lost more than 5% as concerns about worker safety intensified.

In the past three days, protesters shut down transport systems during the morning rush hours, as the police fires tear gas outside the major office buildings.

Bloomberg’s report showed that the pace Chinese companies are taking over Hong Kong had plunged 80% since June. However, markets for initial and secondary stock offerings are relatively less affected.

Japan’s Nikkei 225 traded 0.7% lower after the Cabinet Office reported on Thursday that the country’s economy grew at 0.2% quarter-on-quarter in the three months through September. Economists had forecast a 0.9% expansion.

The unexpected unemployment rate in Australia

Down under, Australia’s ASX 200 gained 0.5%. While not a directional driver, the country’s unemployment rate unexpectedly rose 5.3% in October versus the expected no change from 5.2% last month.

The unemployment rate in Australia increased, and the economy shed jobs for the first time in 17 months. It was a surprise result adding to evidence that central bank interest-rate cuts are failing to gain much traction.

The currency decline and money markets increased bets on the rate cut in February as job loss exceeded 5.2%. The Reserve bank had predicted the rate would remain at 5.2% through next year.

Philip Lowe- RBA Governor may need to lean on a depreciating currency to bolster exporters and lift inflation.