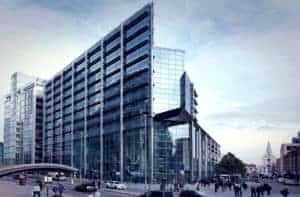 Royal Bank of Scotland Group’s (LON:RBS) share price has fallen deep into the red this morning, even as the bailed-out lender posted better-than-expected interims, with investors instead focusing on the company’s cautious outlook for next year. RBS’ results wrap up the FTSE 10 banking reporting week, with StanChart (LON:STAN) and Barclays (LON:BARC) all having posted results. HSBC (LON:HSBA) reports on Monday.As of 08:08 BST, RBS’ share price had given up 4.97 percent to 206.30p, underperforming the broader market selloff which has seen the benchmark FTSE 100 index give up 1.4 percent so far this morning. The lender’s shares have given up more than 10 percent of their value over the past year, as compared with about a 0.1-percent gain in the Footsie.RBS posts interim resultsRBS announced in a statement today that its operating profit before tax had surged to £2.69 billion in the first half of the year, compared with £1.83 billion a year ago. Reuters noted in its coverage of the news that the result was above the £2.3 billion in a company-provided average of analyst forecasts. The bailed-out lender further announced and interim dividend of 2p per share, along with a special dividend of 12p.Cautious 2020 outlookRBS, however, cautioned that while it retained its outlook for the current year, “given current market conditions, continued economic and political uncertainty and the contraction of the yield curve, it is very unlikely that we will achieve our target return on tangible equity of more than 12 percent and cost:income ratio of less than 50 percent in 2020. The group nevertheless reassured investors that those remained its strategic targets and it believed that they were achievable in the medium term.According to MarketBeat, the part government-owned lender currently has a consensus ‘buy’ rating, while the average target on the RBS share price stands at 294p.