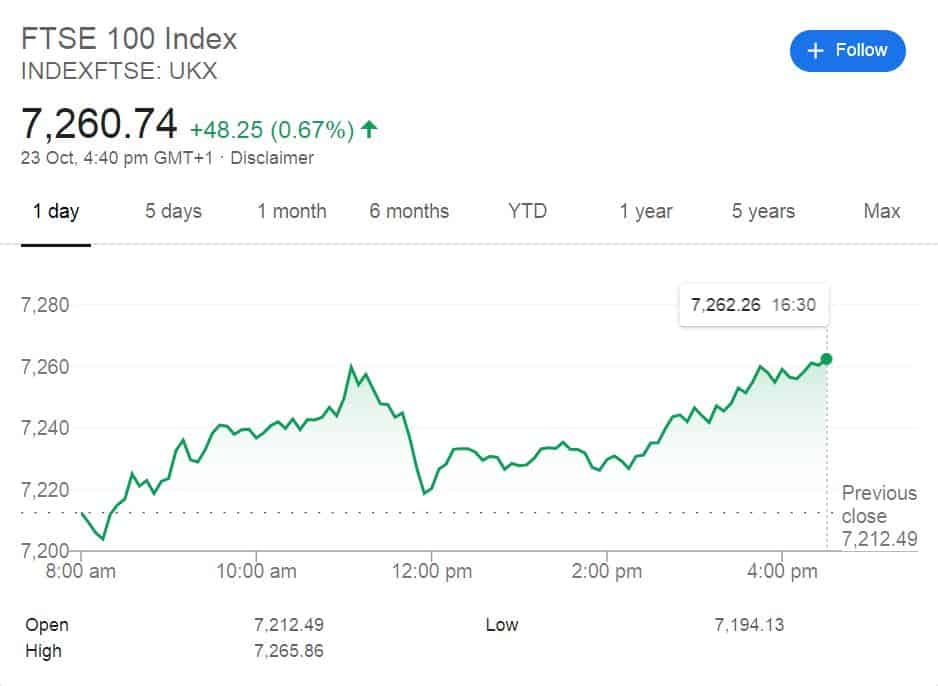 The FTSE 100 index was off to a slow start on Wednesday morning, October 23rd, 2019. Sterling’s struggle later in the day derived from the uncertainty that has been circling Brexit once again, however, helped equities climb high and continue the upward rallies in the second half of the trading session. The FTSE 100 index opened at 7,212.49 level today. Following the daily low of 7,203.85, equities got the steam and Footsie was reported trading at 7,259.79. The market made a daily high of 7,262.26 level where it closed for the day.

Following the partial approval for Prime Minister Boris Johnson’s Withdrawal Agreement Bill and the UK’s administration having written a letter to the EU to ask for an extension, all eyes are now set on the EU’s response that is expected to cause the next big movement in the financial markets. The GBP/USD pair that was previously reported to be trading near 1.30 level has dropped back to around 1.2875 amidst the Brexit uncertainty. The equities, on the other hand, took advantage of the shaky Sterling and fueled the FTSE 100 index to its weekly high.

Significant Events On The Business Front

In the business level news, Just Eat, a UK based online food order and delivery service, was reported to be trading 1.8% higher following a $6.3 billion cash offer by Prosus (Dutch international internet assets division of Naspers) to purchase the takeaway giant.

The star performer for the day came out to be M&G that presented a gain of 4.4% in the second half of the trading session. Hiscox, on the other hand, lost the most on Wednesday and traded 2.6% down. Among the other businesses that struggled on October 23rd, 2019 are Fresnillo (2.9%), and Hargreaves Lansdown (2.3%).

Mr. Vernon Hill, the current chairman and also the co-founder of Metro Bank, announced his departure from the retail bank effective immediately. Following the news, the stock lost much of its gains for the day and closed at 193.60 GBX.

Softcat released its full-year earnings report that came out better than expected. The IT infrastructure provider was highlighted to have been performing optimally amidst the rising uncertainty on the macro level. Antofagasta was also observed upbeat following its Q3 production report that highlighted lower costs and strong copper production.

The communications equipment company, Filtronic has also announced its full-year earnings report on Wednesday. Owing to the positive outlook, the stock gained 10.49% for the day.