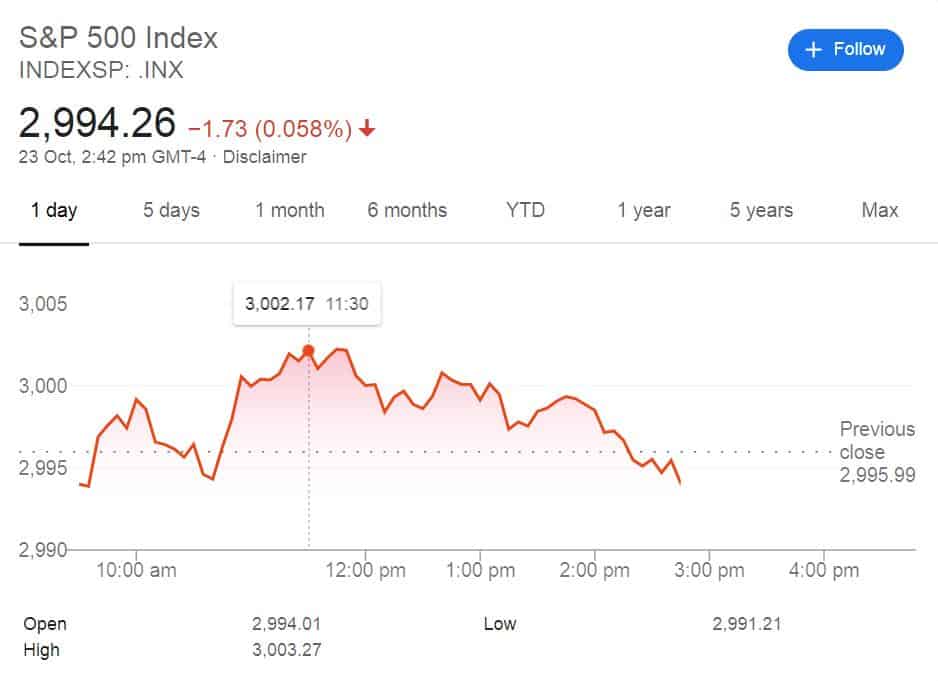 The S&P 500 index continues to be undecided amidst all the positivity circling the U.S – China trade negotiations. Despite having made remarkable gains yesterday when the index approached near an all-time high of 3,025 level, things appear to be gloomy for the market on Wednesday, October 23rd, 2019 so far. The market opened at 2,994 level this morning. While it continues to trade above the opening level (currently at 2,995.41), the stock market analysts have highlighted that the drop below 2,998 level may hint at the U.S equities losing steam and the previously forecasted upward rallies above the 3,025 level to be a little far-fetched.

Buyers Are Reluctant Ahead Of The FOMC Meeting

Analysts have further added that following the UK’s House of Commons proceedings in which MPs have voted in favor of the Withdrawal Agreement Bill but have rejected the Programme Motion (timeline for the deal to be realized), the financial markets have been under pressure. Blend it with the Federal Open Market Committee (FOMC) meeting set for next week that is likely to announce the decision regarding a third rate cut this year, and the reluctance in the buyers to break above the crucial resistance at 3,025 starts to find ground.

Significant Events On The Business Front

On the business front, consumer discretionary and communication services seem to be the underperforming sector while healthcare, industrial, and machinery continue to make newer highs. While FactSet has highlighted 81% of the 118 companies that have posted their Q3 results so far to have reported a positive outlook, things don’t appear to be the same for October 23rd, 2019. Following the day close on Tuesday, Texas Instruments posted the Q4 revenue report that lagged behind the analysts’ forecast. Following the report, the stock has been trading sideways around $120.

Caterpillar has also announced its full-year earnings report earlier this morning that failed to meet the analysts’ estimates. While the stock fell from around $135 to $131 following the news, the losses have been regained with share prices standing firm at $135.46 currently. Boeing’s report was no different in this regard. Having missed the target, the business made an announcement that 737 Max can be expected to fly by the end of the year. The forecast for the jet’s output increase next year was estimated at 36%. While it fueled an upward rally in the share prices, it was unsustainable with the stock falling from a daily high of $349.83 to the daily low of $338.30 where it is currently trading.