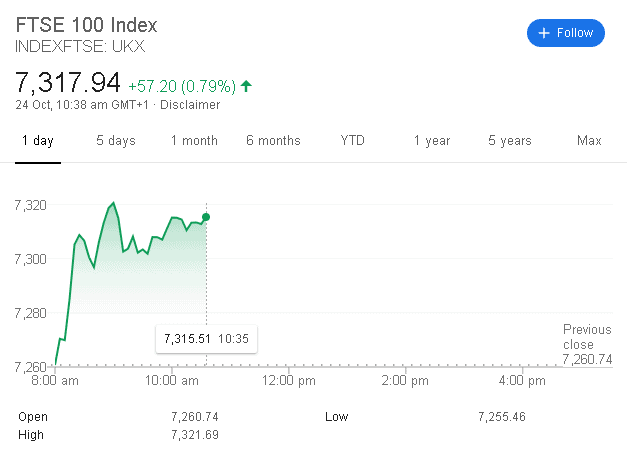 In the recent news, the FTSE 100 index has been observed trading higher than expected this morning, Thursday, October 24th, 2019. While the Brexit uncertainty was expected to keep the financial markets under pressure until the decision from the European Union regarding UK’s request for an extension wasn’t announced, the market opened at 7,260 level and presented an immediate hike to 7,320.66 within an hour. The index is currently trading at 7,312.66.

ECB Meeting And PMIs Among The Major Market Movers For Today

As per the stock market analysts, the hike may be associated with the French/German services and manufacturing PMI revealed a couple of hours earlier. While France reported figures better than the forecast, flash manufacturing PMI for Germany was almost aligned with the estimate with the flash services PMI missing the target only slightly. Later in the day, the European Central Bank (ECB) is holding a meeting followed by a press conference that is expected to highlight the monetary policy statement and the main refinancing rate. The meeting, therefore, is anticipated to stir up the next movement in the financial markets.

Significant News On The Business Front

On the business front, Royal Bank of Scotland (RBS) was reported trading 1.8% lower this morning following negative outlook for the third quarter primarily due to the £900 million of PPI charges.

AstraZeneca has recently posted its fifth consecutive quarter of growth after which the stock has been reported trading 2% higher on Thursday. Following approval for Zejula (ovarian cancer treatment) by U.S regulators, GlaxoSmithKline was also observed trading 1.38% higher this morning.

Metro Bank, on the other hand, has announced significant losses for the third quarter. With chairman and co-founder, Mr. Vernon Hill, having announced his departure from the retail bank as well, it has been declared that the previously aspired growth plans are likely to take a hit since the bank is busy dealing with an accounting scandal as well.

Ms. Letita James, the current attorney general of New York has stated on Wednesday, that a settlement deal valued at $700 million has been signed between Reckitt Benckiser and New York along with five other states. The drug distributor was previously accused of falsely marketing a drug for the treatment of opioid addiction.

Other significant events of importance for the financial market today include Kaz Minerals and Polymetal International, releasing its Q3 production report. Relx, RPS Group, and Evraz have also announced that their Q3 trading statement will be revealed on Thursday. A full-year earnings report for RDI Reit will be declared moments from now.