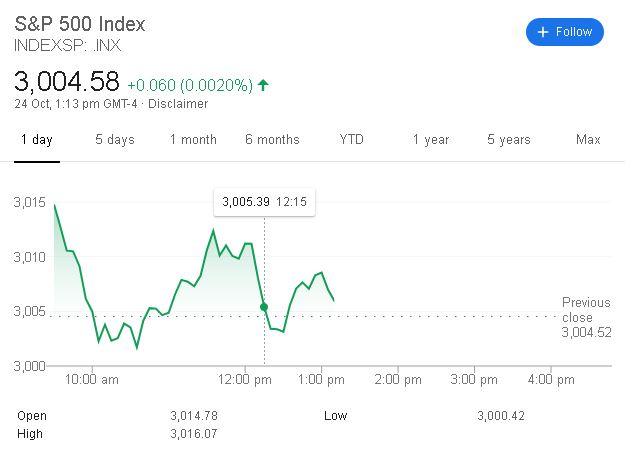 The up and down cycle of the S&P 500 index continues on Thursday, October 24th, 2019. The market opened at around 3,015 level that was only 10 points lower than the all-time high for the index. Minutes into the trading session, a downward rally got steam and made a daily low of around 3,000 level. As per the latest report, the market has already started to recover from the downbeat rally and is currently trading around 3,007.

Tech Industry Have Posted An Overall Loss Of 0.2%

While the S&P 500 continues to challenge its all-time high of 3,025, the tech sector appears to be creating the strongest hurdle for it to break above it. In the 11 prominent sectors covered in S&P 500 listings, software and semiconductor manufacturers have been highlighted as the worst performers in the previous two weeks, as evident from the earnings reports. The overall drop in the tech sector is reported at 0.2% so far which may not sound alarming. However, since all other sectors have posted only gains so far, some as high as 2%, the loss in the tech sector, according to the analysts, is intriguing, to say the least.

The stock market experts have also added that the tech sector makes up 22% of the overall listings in the S&P 500 index. The tech giants like Facebook, Amazon, Apple, and Alphabet, however, are yet to announce their earnings report in the upcoming week. As such, the buyers are hoping such big names to come to the rescue and put an end to the dry spell in the tech sector.

Mr. Malcolm Polley, serving as the current chief investment officer at Stewart Capital Advisors LLC, was reported stating that the breakout of S&P 500 above the strong resistance at 3,025 without things turning green for the tech sector isn’t out of question. But it surely poses a great difficulty for the index to accomplish the same highs without help from the tech sector.

In an otherwise uneventful earnings season for the tech sector, Microsoft and Lam Research have been the only corporations so far that have posted a positive outlook. The tech industry had been in the lead earlier this year despite the rising tension between the U.S and China, and a global economic slowdown at large. Looking at the current performance, however, analysts have recommended to be cautious of the S&P 500 index since negative earnings report by the aforementioned tech giants next week may cause a steep decline in the market.

Specialising in economics by academia, with a passion for financial trading, Michael Harris has been a regular contributor to Invezz. His passion has given him first hand experience of trading, while his writing means he understands the market forces and wider regulation.
Related news
UK shares gain on optimism of stimulus-driven economic recovery
13th July, 18:02
AMC Entertainment inks a deal with bondholders to minimise up to £499 million of debt
13th July, 16:09
E.ON stock price slides after selling Innogy’s Czech retail business
13th July, 14:22
Analog Devices to acquire smaller rival Maxim Integrated for £16.6 billion
13th July, 13:22
Halfords stock price recovers 5% as the retailer plans to close 60 stores
13th July, 12:48
Related market data
Invezz uses cookies to provide you with a great user experience. By using Invezz, you accept our privacy policy.