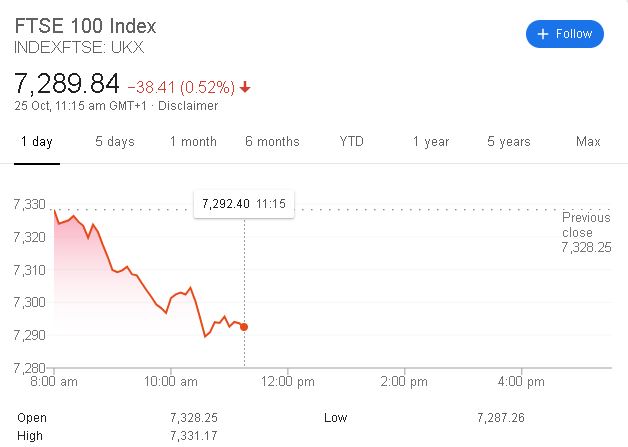 After an otherwise upbeat week for FTSE 100 index, today appears to not be as kind for the market so far. The market opened at 7,328.25 level on Friday morning, October 25th, 2019. It has been trading below the opening level in the early trading session having made a daily low of 7,292.40 where it is trading currently.

Prime Minister Boris Johnson has already tried three times to call for general elections with all of the attempts rejected by the UK’s parliament. According to ING Economics, this can be construed as minimal chances for polls until the next year, hinting at greater risk for the Conservatives.

UK’s prominent advertising and public relations company, WPP, has announced its Q3 update this morning. Owing to the largely positive outlook, the shares have come forward as the star performer and are reported to be trading 6.3% higher.

HSBC and Standard Chartered are expected to release their Q3 earnings report in the upcoming week. As per the stock market analysts, Hong Kong’s anti-government protests are likely to manifest in the form of a slightly negative outlook in the earnings report.

Barclays report, on the other hand, highlighted mixed outcome but the investors have chosen to stick to the positive that has fueled the stock by 2.1%. Barclays has previously announced that the customers will no longer be able to withdraw money via the designated branches of Post Office all over the UK. In light of how poorly did the public receive this change, the financial services company has dropped the aforementioned plan.

The Bank of England’s Deputy Governor, Sam Woods, was reported stating on Thursday that there are plans of imposing cuts credit unions’ capital requirements. Such a move will help promote stronger competition in the niche of lending.

More On The Business Front

Other major news on the business front include the Q3 trading statements for Synthomer, Vivo Energy, Hastings Group Holdings, and Essentra to be declared later in the day. Glencore PLC will also be announcing its Q3 production volume on Friday, October 25th, 2019. Sources have also reported that an annual general meeting (AGM) will be held by Trafalgar Property Group today.

German IFO business climate released this morning at 09:00 GMT +1 aligned itself with the forecast and was reported to have cast a minimal impact on the financial markets. The figure for U.S Michigan consumer sentiment that will be revealed at 15:00 GMT +1 can be expected to stir up a movement in the market later today, as per the financial experts.