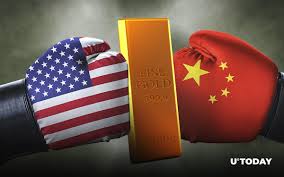 As the U.S and China cast doubt over their trade deal agreement, the safe-haven currencies like the yen and Swiss franc were appreciating, and the yuan hits lower.

Additionally, Chinese retail sales, investment, and industrial output data were weaker than expected. The data sent the Australian dollar one-month low, even after the unemployment data had already knocked it down.

The U.S-China trade negotiations have ‘hit a snag’ over farm purchases. China does not want a deal that looks one-sided in favor of the U.S. The Wall Street Journal cited people familiar to the matter in its report.

The report came after Trump said a trade deal with China was ‘close’ but refrained from giving details. He even warned he would raise tariffs substantially on the Chinese goods in case there was no deal.

Last month’s agreement between the two superpowers to sign a deal boosted optimism in the global financial markets. The confidence lifted the yuan and risk-sensitive currencies.

“If Trump takes a hard line, emboldened by the latest strength in stock markets, and refuses to make some concessions to China, there will be risk an agreement cannot be reached at the last minute,” said Makoto Noji.

Noji is the chief currency and foreign bond strategist at SMBC Nikko Securities.

In a new Reuters poll, most economists do not expect Washington and Beijing to reach a permanent trade deal over the coming year.

The Japanese currency, often a safe-have asset due to Japan’s status, had hit a five-month low of 109.49 a week ago. Japan is the largest net creditor nation.

Also, the euro and the yen were firm at 119.60 euros, near one-month touched the previous day.

The yen hardly changed after Japan’s GDP data showed the economy grew an annual rate of 0.2% in July-September. The rate was below the economists’ forecast of 0.8%.

The Swiss franc has been stable, having risen almost 06% over the last two days against the euro, to hit its highest level in more than a month.

The unexpected downbeat China data indicated continued pressure on the world’s second-largest economy and the subsequent risks to global growth.

The yuan took the data in a stride but changed little at 7.0223 yuan per dollar in foreign trade. However, on Friday it stood off its three-month high of 6.9650.

Additionally, Chinese retail sales, investment, and industrial output data were weaker than expected. The data sent the Australian dollar to hit a one-month low, even after the unemployment data had already knocked it down.

The weak domestic unemployment data showing the first fall in payrolls in three years had hit it.

The euro remained stable at $1.10075, having touched a one-month low of $1.0995 in the U.S trade. The dollar index stood near a one-month high reached in the previous session.