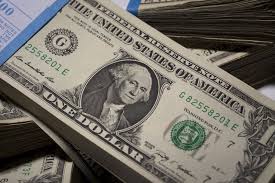 Written by:
Andia Rispah
14th November 2019
Are you looking for fast-news, hot-tips and market analysis? Sign-up for the Invezz newsletter, today.

The U.S dollar slowly moved up on Thursday after Jerome Powell’s remarks. The Australian dollar dropped following the release of unexpected unemployment data.

The U.S Dollar Index inched up 0.1% to 98.280 by 04:30 GMT. Powell, who is making a statement to the Congress, said while the economy was on track now, the current economic expansion still faces risks.

“We see the current stance of monetary policy as likely to remain appropriate as long as incoming information about the economy remains broadly consistent with our outlook,” Powell said on Wednesday before the congressional Joint Economic Committee in Washington.

“However, noteworthy risks to this outlook remain,” he added.

Meanwhile, the AUD/USD pair dropped 0.6% to 0.6799 after the statistics bureau reported Australia’s unemployment rate suddenly rose to 5.3% in October. The Reserve Bank of Australia had not anticipated a change from 5.2% reported the previous month.

The NZD/USD pair traded 0.3%. Giving back some of its gains yesterday after the central bank also unexpectedly left the rates unchanged.

The USD/JPY pair dropped 0.1% to 108.71. On Thursday, Japan’s Cabinet Office reported that the country’s economy grew at 0.2% quarter-on-quarter in three months through to September.

Economists had forecast a 0.9% expansion.

Elsewhere, the NZD/USD pair surged 1.1% to 0.6396 after the Reserve Bank of New Zealand left rates on hold after cutting twice this year. The aid there was no urgency to ease policy.