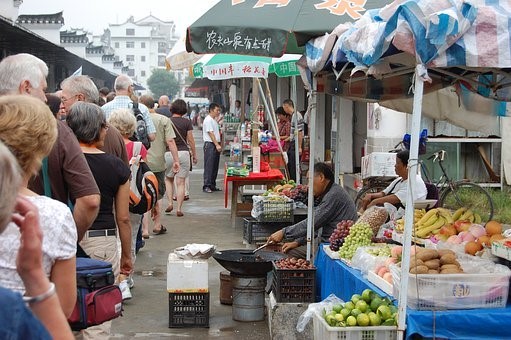 Every year millions of small commodities are delivered from China’s central province Yiwu, to about 200 countries and regions. Yiwu is China’s famous commodities market and is said to be the origin of more than 2.1 million types of commodities.

A common small commodity that originates from the city of Yiwu is the drinking straw which fetches a profit of about $0.00011 for each unit. But don’t let the unit profit fool you; a commodity as ‘tiny’ as that fetches China a whopping $28 million each year on average.

One of the interviewed traders is Mr. Lou Zhongping who started off as a street vendor fourteen years ago before venturing into the toothbrushes business. But in 1994, he decided to forge his own straw brand. As you would imagine, the business wasn’t making much profit due to the minuscule nature of profits from the commodity. But over time, he expanded his line of products and through innovation, he created a heart-shaped straw. As we speak, Zhongping boasts of four straw patents thanks to his innovation and diversification skills.

Away from straws, Chinese-made Russian dolls also made a global debut about three decades ago and ever since then, China has been cashing in on this micro-industry. The product originates from a small town in China called Yimianpo in the north-eastern province of Heilongjiang. About thirty years ago, the people of Yimianpo started carving the dolls from branches of trees and today, the industry’s yearly revenue from the dolls is about $28.41 million with China consuming 90% of the output.

If you travel down to south China in a province called Guangdong, you’ll easily spot dozens of guitar manufacturers along the streets. This small province produces about 25% of the guitars being sold globally, while 80% of ukuleles guitars sold worldwide originate from China.

Using a market-oriented strategy, more than 26,700 industrial enterprises have prospered in China’s Yiwu. Today, 16 highly competitive industries including hosiery and accessories have a base in Yiwu.