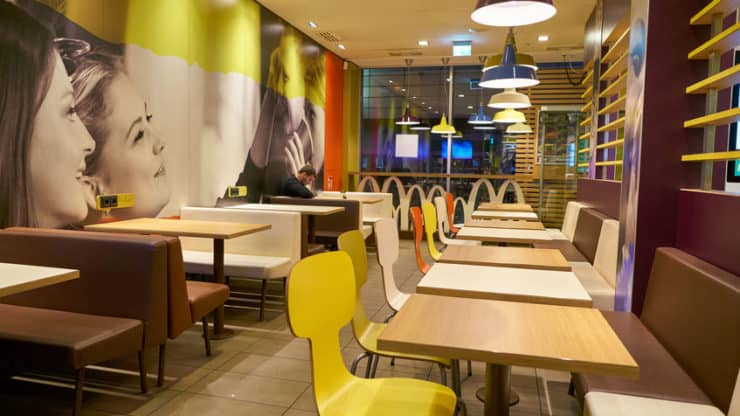 McDonald’s (NYSE:MCD) and Nando’s said they will shut down all of 1,270 restaurants in the United Kingdom and Ireland starting today due to the coronavirus outbreak. The closures include takeout services as well.

“Over the last 24 hours, it has become clear that maintaining safe social distancing whilst operating busy takeaway and Drive-Thru restaurants is increasingly difficult and therefore we have taken the decision to close every restaurant in the UK and Ireland by 7 pm on Monday 23 March,” said Chief Executive of Mcdonald’s UK, Paul Pomroy.

“I have been clear throughout this that we would only continue to operate whilst it was safe for our people and together with our franchisees, we feel now is the time to make this decision,” added Pomroy.

The UK government ordered the closure of cafes and restaurants on Friday, excluding takeaway food services. McDonald’s and Nando’s said food from restaurants will be given to those in need.

McDonald’s has more than 125,000 employees in the United Kingdom and 86% of its restaurants are run by franchisees. It shut down dining areas at its stores in the US last week and asked franchisees to follow suit. The company still runs takeaway services in some states.

McDonald’s said staff that’s employed directly by the company would be paid in full until 5 April. On Friday, the UK government announced a financial assistance package, promising to pay 80% of staff wages.

Nando’s posted a tweet on Sunday, saying the company thinks “the best course of action right now is to temporarily close our restaurants”.

The food chain, which employs around 20,000 people in the UK, said safety of its customers and employees is the top priority.

Apart from McDonald’s and Nando’s, Costa Coffee, sushi chain Itsu and Subway said they will close their UK restaurants on Monday.

Costa Coffee has nearly 2,000 branches in the country and its 19,000 employees, most of whom receive minimum wages, will get full pay over the next eight weeks.

Specialising in economics by academia, with a passion for financial trading, Michael Harris has been a regular contributor to Invezz. His passion has given him first hand experience of trading, while his writing means he understands the market forces and wider regulation.
Related news
AMC Entertainment inks a deal with bondholders to minimise up to £499 million of debt
13th July, 16:09
E.ON stock price slides after selling Innogy’s Czech retail business
13th July, 14:22
Analog Devices to acquire smaller rival Maxim Integrated for £16.6 billion
13th July, 13:22
Halfords stock price recovers 5% as the retailer plans to close 60 stores
13th July, 12:48
Norway’s DNB tops analysts’ estimates for profit as loan loss provisions contract in Q2
13th July, 12:18
Related market data
Invezz uses cookies to provide you with a great user experience. By using Invezz, you accept our privacy policy.