Shares of Darden Restaurants (NYSE:DRI) have surged more than 30% since the weekend after the restaurant chain announced it is furloughing a portion of its support center employees and slashing executive pay amid the COVID-19 outbreak crisis.

The loan agreement also includes an option to allow Darden to ask for an increase of up to $100 million in loans at the election of existing or new lenders.

“More than ninety-nine percent of our restaurants remain open, with the remaining restaurants temporarily closed due to limited demand or other operational constraints,” said Gene Lee, CEO.

Restaurant chain also said it will furlough some of its restaurant support center staff as a result of the existing crisis, while the remaining staff will face pay cuts. In addition, senior executives of the company will take a 50 percent pay reduction, while CEO Lee will forego his salary until business is stabilized.

“We have significantly reduced expenses, including marketing, and deferred nearly all of our capital spending, which includes opening new restaurants. Additionally, we are making adjustments at the Restaurant Support Center to match our current operating model,” added Lee.

Shares of Darden lost nearly 80% of their value in about five weeks in February and March. The stock price has recovered a part of its losses so far, as it has managed to gain around 32% in just two days of trading this week. 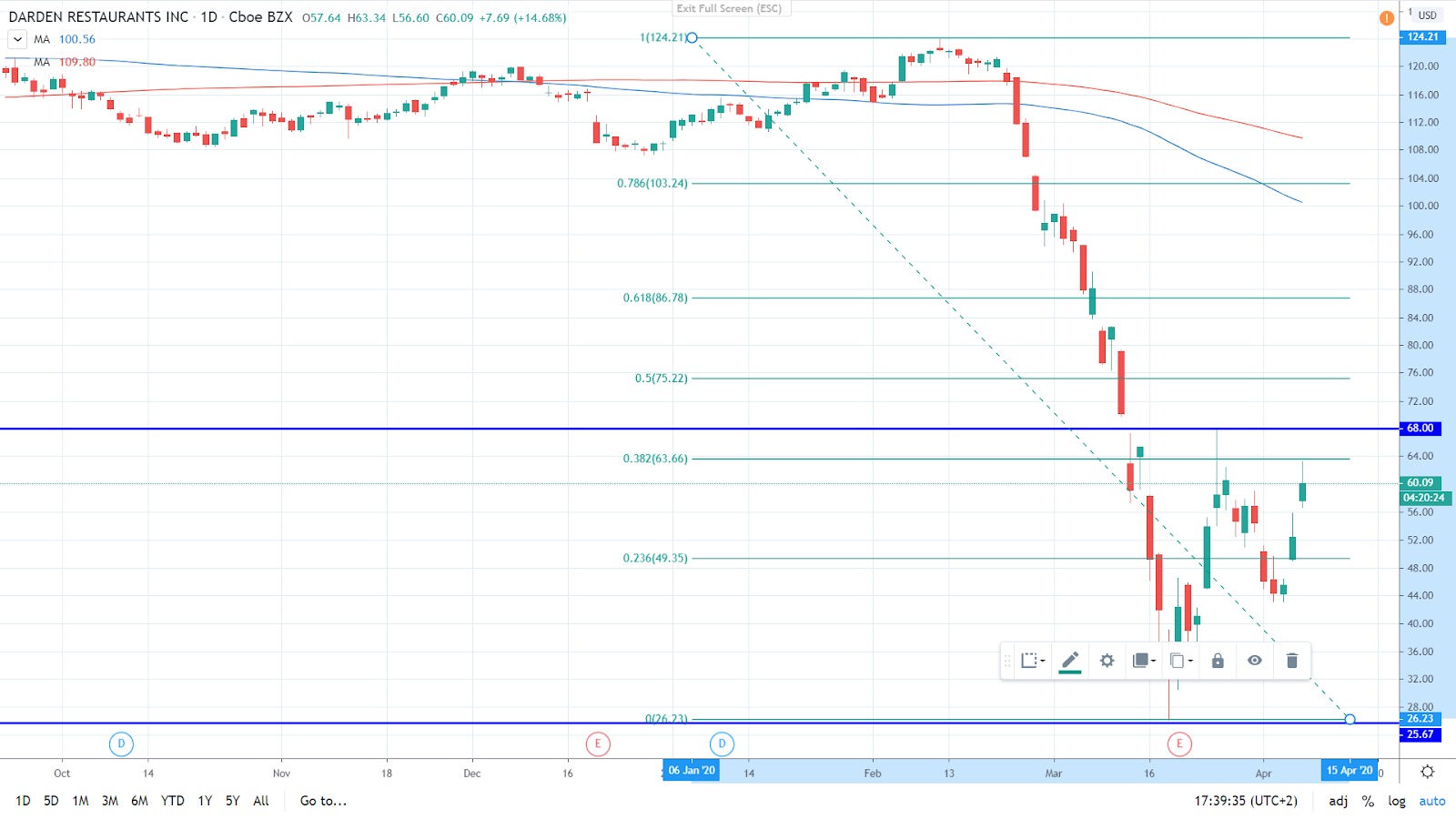 As you can see in the chart, the stock price has already managed to recover nearly 40% of losses. However, the first attempt failed, while the bulls are now trying to set up a base for a new push higher. For the bulls, the $68 mark is the key short-term target.

Shares of Darden Restaurants gained more than 30% this week after the restaurant chain announced it took a new $270 million loan, furloughed part of its staff, and slashed the pay of its senior executives by 50%.

Specialising in economics by academia, with a passion for financial trading, Michael Harris has been a regular contributor to Invezz. His passion has given him first hand experience of trading, while his writing means he understands the market forces and wider regulation.

Related news
Provident Financial reports a significant decline in loan volumes due to tighter lending
27th May, 12:36
FTSE MIB price hits 4-week high as Italy carefully reopens for business
27th May, 12:05
Ryanair calls Lufthansa’s bailout package a threat to competition as it vows to appeal against it
27th May, 11:42
EDF applies to build Sizewell C nuclear plant in the UK
27th May, 10:37
Theta price explodes 265% as Samsung plans to incorporate Theta.tv in Galaxy smartphones
26th May, 22:15
Related market data

Investing is speculative. When investing your capital is at risk. This site is not intended for use in jurisdictions in which the trading or investments described are prohibited and should only be used by such persons and in such ways as are legally permitted. Your investment may not qualify for investor protection in your country or state of residence, so please conduct your own due diligence. This website is free for you to use but we may receive commission from the companies we feature on this site. Click here for more information.